The goal of creating a year-round local food culture in the nation’s northern regions is widely shared. While it is hindered by relatively short growing seasons, the increasing number of indoor growing facilities is helping to change that — at least for those crops, such as salad greens and microgreens, that take well to climate control and hydroponics.

Living Water Farms in Strawn, Illinois is one of these year-round operations. Growing a wide variety of lettuces, microgreens, herbs, and similar produce in a 10,000 square foot greenhouse, Living Water has built a clientele among restaurants and retail outlets in Chicago (a couple of hours drive to the north), St. Louis (about three hours to the southwest), and other Midwest locations. 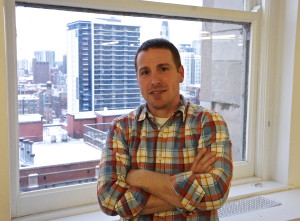 Now Living Water, which started producing for market six years ago, is planning for a big expansion, into a 160,000 square foot greenhouse in a building a bit farther south that has seen previous use as an indoor growing facility. That is why Mark Schneider — president and CEO of Living Water Farms — is participating as a member of the first group of Fellows in FamilyFarmed’s Good Food Business Accelerator program.

The Accelerator provides mentoring, technical assistance, and networking opportunities to its nine Fellows. The goal is to produce solid and attractive business plans that the Fellows are expected to pitch at the Good Food Financing & Innovation Conference on March 19. This will be the first of three days of FamilyFarmed’s 11th Annual Good Food Festival & Conference, which takes place at the UIC Forum on the University of Illinois Chicago campus.

When asked if he was anxious to present Living Water’s plans to an audience of investors and financiers at the Financing Fair, Schneider said, “Anxious as in excited about? Absolutely. We need to really grow to be long-term, sustainable, and viable… This opportunity is a big opportunity. It’s exciting because it’s significantly bigger, it can allow us to have a significantly greater impact on the local Good Food movement.”

He added that participating in the Accelerator program will “help really make it a more realistic opportunity — it is really great in timing and partnership.”

Schneider said he hopes the Accelerator program will help facilitate much larger production volume that underscores the booming demand for local grown produce. He projects this as a vertical expansion rather than an effort to expand Living Water’s geographical footprint.

“Let’s grow more for our existing customers,” Schneider said. “What can we grow more of, on a larger scale, instead of being super-specialty? How can we capitalize and maximize our distribution networks, our customer base, our background, admin for taking orders. We can add in more products and a lot more volume for very little extra overhead.”

He noted that Living Water does not use direct marketing outlets such as farmers markets or CSAs — “though it’s always nice to be able to tell people where they can find our products” — so the Trade Show portion is the most beneficial to the operation. “With more institutional buyers or wholesale buyers, that’s probably the higher-value connections, because of our model of how we sell and distribute,” he said.

Schneider is a former firefighter who went all in on a family sustainable farming business. His in-laws, Kevin and Denise Kilgus, had for years maintained gardens that evolved into a truck farming business. This, in turn, spurred them to engage with Stewards of the Land, an association of farms in a region centered on Fairbury, Illinois, that is committed to sustainable food production.

These principles carried over when the family decided to go all in on the greenhouse concept and abandoned outdoor growing. Living Water grows its produce in a chemical-free and pesticide-free environment, using soil rather than the kinds of synthetic growing media that are common in many hydroponic facilities.

Its expansion plans include energy savings from recycling hot water produced by methane from an adjacent landfill and, eventually, building a wind turbine. “One of the keys, we’re still a bit too much of a boutique grower now…,” Schneider said. “The bigger a greenhouse is, the more efficient it is to heat it.”