Chicago will host the 30th anniversary Farm Aid concert this Saturday (Sept. 19). Residents of the nation’s third most-populous city will have the opportunity to reacquaint with issues concerning family farmers, through the highest-profile — and most star-powered — event that benefits them and their causes. 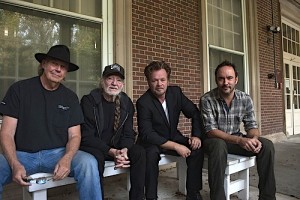 Music legends Willie Nelson, Neil Young and John Mellencamp, along with dozens of other artists, staged the first Farm Aid concert in Champaign, Illinois in 1985 to respond to a farm economic crisis. They and fellow star Dave Matthews, who joined the Farm Aid board in 2001, have raised more $48 million to support farmers and organizations such as FamilyFarmed, with a goal to make our food supply more local, sustainable, humane and fair.

Saturday’s concert at FirstMerit Bank Pavilion on Chicago’s Northerly Island is, as always, a fundraiser for Farm Aid and its causes. The lineup includes the four rock stars mentioned above, plus Mavis Staples, Imagine Dragons, Jack Johnson, and more. (For ticket information, click here.)

“The first Farm Aid concert sparked a family farm movement that has rallied hundreds of thousands in support of a system of agriculture that’s good for family farmers, good for the economy, good for the soil and water and good for all of us,” said Carolyn Mugar, Farm Aid’s executive director, who has run the organization since its first year. “Over the years, we’ve heard from so many people how crucial it is that we continue to work together and stand shoulder-to-shoulder with family farmers as we fight for change.”

Farm Aid is not just about the music, though. The nonprofit organization, based in Cambridge, Massachusetts, has also expanded its mission and reach greatly since its beginnings.

The fundraising concert will be preceded by a series of events aimed at informing and engaging the public on the challenges and opportunities that face the nation’s small and medium-sized farms, and how they are benefiting from a Good Food movement that promotes greater supply and demand of local and sustainably produced food.

“The Farm Aid Board is very passionate about this,” said Hilde Steffey, Farm Aid’s program director. “Food and where it comes from is such a core piece of who we are and how we connect as humans. Our board has really stayed committed to this.”

Conceived as a one-off concert in 1985 aimed at drawing national attention to economic conditions that were forcing thousands of family farmers to surrender their livelihoods and their life on the land, Farm Aid today encompasses a Family Farm Disaster Fund; the Farmer Resource Network; a grant program aimed at helping farm families stay on their land, building local markets, confronting corporate control of agriculture, training new farmers and supporting farmer-to-farmer programs for more sustainable agricultural practices; and the Farm Aid Hotline for farmers seeking advice or financial assistance.

They also produce HOMEGROWN.org, a website Farm Aid describes as a community for celebrating the culture of agriculture sharing skills such as growing, cooking and canning.

FamilyFarmed will be directly involved in Farm Aid by partnering on an urban farm bus tour to growing sites around Chicago on Friday morning and participating Saturday in the HOMEGROWN Village, which will feature interactive, hands-on activities about farms and food at the site of the concert, FirstMerit Bank Pavilion on Northerly Island. 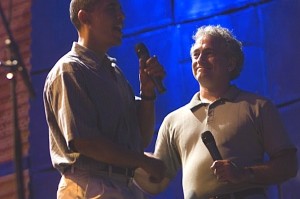 Barack Obama, then a U.S. senator from Illinois, was introduced to the audience at the 2005 Farm Aid concert near Chicago by FamilyFarmed President Jim Slama.

The choice of Chicago as the site for the 30th anniversary concert is not a coincidence. That first Farm Aid concert was held about 135 miles south in Champaign, site of the University of Illinois’ flagship campus. The 20th anniversary concert in 2005 was held in the Chicago suburb of Tinley Park. Jim Slama, FamilyFarmed’s president, was honored to introduce Barack Obama — then a U.S. senator from Illinois — to the audience.

Steffey said Chicago’s increasing status as a hotbed for Good Food movement and urban agriculture activities also was an important factor in the site choice.

“With as much progress we’ve seen in the past 30 years in urban and rural connections, and the growth in the infrastructure of urban farms, it just made a lot of sense to come to heartland again and be in Chicago,” Steffey said. “Chicago is really a leader in this space, and it’s an opportunity to raise awareness of all the good work that’s happening in your city and the region, and also to think about past 30 years and its impact.”

[To read more about the wide-ranging activities relating to the Good Food movement in Chicago, click here.]

The run-up to the Farm Aid concert in Chicago begins with the Film2FarmAid event that, over three nights beginning Tuesday, will present 15 feature-length and short films on subjects pertaining to food and agriculture at the McCormick Place convention center.

Some close friends of FamilyFarmed, and its efforts to promote the Good Food movement, will be showing documentaries they produced at Film2FarmAid on Tuesday evening.

• Food Patriots is co-produced by Jeff and Jennifer Amdur Spitz of Chicago’s Groundswell Films. The film documents how the married couple was motivated by their son Sam’s serious battle with a food-borne illness to grow a food garden and raise chickens at home and become Good Food movement activists. Along with their moving family story, Food Patriots treats the serious issues of fixing the nation’s food system with a dose of good humor, and takes an incremental approach that calls for people to start by making a 10 percent change in their food purchases and eating habits.

• A Chicago Ranch is a lyrical short film about the pioneering efforts of Illinois’ Frank Morgan to raise grass-fed beef for the nearby Chicago market at his Q7 Ranch. Chicago’s Mark Wilhelms produced the film shortly before Morgan’s death in 2012, and it helped inspire him to launch Red Meat Market, which retails local and sustainably produced meat online and is a regular participant in FamilyFarmed’s Good Food Festival & Conference.

The film festival will be capped on Thursday evening with the presentation of the 1984 feature film Country, about an Iowa farm couple — played by Jessica Lange and Sam Shepard — who were fighting to stave off foreclosure during the crisis that afflicted family farmers in that era. The real-life issue portrayed in the movie was one that inspired the first Farm Aid concert in 1985. 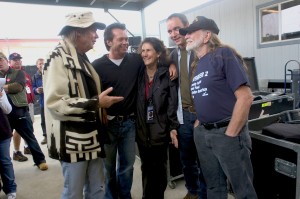 Carolyn Mugar (center) has been executive director of the Farm Aid organization since just after its beginning in 1985. Here, she is surrounded by Farm Aid board members (left to right) Neil Young, John Mellencamp, David Matthews and Willie Nelson at the Farm Aid concert in Seattle in 2004. Photo: ©Paul Natkin/WireImage.com

The showing of “Country” will be followed by a panel discussion, led by Farm Aid’s Carolyn Mugar, that will include local family farmers and Sarah Vogel, who led the legal team that won the class-action case of Coleman v. Block, which resulted in an injunction barring the U.S. Department of Agriculture from foreclosing on nearly 80,000 family farms. Vogel went on to serve as North Dakota’s agriculture commissioner from 1989 to 1997.

The Tuesday and Wednesday film showings will also be followed by panel discussion, and a post-screening reception featuring local foods will be held each evening at McCormick Place’s rooftop farm. The film festival is co-sponsored by the convention center and Savor…Chicago, its exclusive food and beverage provider, which is living up to a commitment made at FamilyFarmed’s 2014 Good Food Festival & Conference to greatly increase its use of locally produced food.

The organization will also present Farm Aid 30: Strength from Our Roots for two days, beginning Thursday at the Fourth Presbyterian Church in downtown Chicago. Steffey describes the Thursday session as focused on history and story-telling by both veterans of the movement and younger activists. “We’ve been really intentional trying to encourage as much participation as we can from some of the younger emerging voices and efforts that are working on farm issues today,” she said. “We view it as an opportunity to connect generations, to connect rural and urban.”

Friday will bring the bus tour of urban farms that Farm Aid is conducting in partnership with FamilyFarmed, and discussions that Steffey said would be “more of a working session for those interested in digging a little deeper.” And on Friday night there will be a warm-up for Saturday’s big events on Northerly Island: a ticketed pre-party at the River Roast restaurant on the north side of the Chicago River in downtown Chicago.

To learn more about Farm Aid’s history, goals and priorities, click here to read a column by founder Willie Nelson that Good Food on Every Table republished recently.