Farm Aid, which provides technical assistance, financial aid, and advocacy for family farmers, is coming to Chicago for three days of events capped on Sept. 19 by its 30th annual fundraising concert featuring the music legends — Willie Nelson, Neil Young, John Mellencamp, and Dave Matthews — who have been the organization’s leaders for decades.

Farm Aid, which has advocated for family farmers since its founding in 1985, will come to Chicago to hold its 30th anniversary concert on Sept. 19, with activities to raise public awareness about our food system planned for the previous two days.

FamilyFarmed will be participating in FarmAid activities as an organizer of an urban farm bus tour that will take place Sept. 18 (register by Sept. 10 to participate) and in The HOMEGROWN Village, an afternoon of interactive, informative and fun events that will take place on Sept. 19 on Chicago’s Northerly Island, site of the Farm Aid concert that night.

We also will be covering the event here on Good Food on Every Table. And to kick off that coverage, here is a story that is very close to home for FamilyFarmed. Farm Aid’s website includes a number of stories about “Farmer Heroes,” and one recent post featured Living Water Farms — which just happened to be one of the nine businesses that participated as Fellows in the first year (2014-15) of FamilyFarmed’s Good Food Business Accelerator. We republish the article here with Farm Aid’s permission.

For the Kilgus and Schneider families, farming is a family affair. While working as a firefighter in Champaign, Illinois, Mark Schneider started a side business with his wife Natalie and in-laws Kevin and Denise Kilgus by growing plants in their greenhouse. Two years in, Mark realized that farming wasn’t the kind of work you do in your off-time, and he left his job at the fire department to officially establish Living Water Farms.

More family came on board to help — Mark’s brother Matthew, a CPA,  joined as a partner and co-manager of the farm. Matthew was excited about the opportunity to work in a business he could help direct and get involved in the hands-on side of farming, along with managing the financial side of the business. 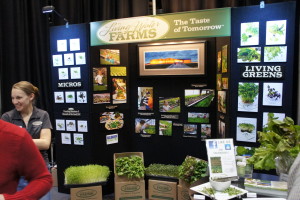 Both the Schneider and the Kilgus families grew up with gardens in their backyards and were no strangers to soil. Growing produce for a living, though, they experienced first-hand the challenges and demands of owning a farm and creating a relationship with the urban populations located within a couple hours of their home in Strawn, Illinois. Even with those challenges, they recognized the potential to start something great.

“Our food system has evolved and has gotten away from people knowing how their food is raised and where it comes from,” said Mark. “It’s shifted to corporate and very large-scale farms, but there is this transition back where people are starting to say, ‘Hey, I want to know how this is produced and if it’s safe to eat.’ I think that is the driving force behind the local food movement and there’s an advantage if people can put a face behind the product.”

Mark, Natalie, Kevin and Denise are doing just that, raising fresh, local, pesticide-free greens that earn rave reviews from top chefs and eaters across the Midwest.

Living Water Farms focuses on growing greens, from micro greens like micro arugula and micro cilantro, to living greens like romaine and kale, and other items like wheatgrass, pea shoots and mung bean sprouts. Grown in a 10,000 square foot greenhouse, these greens are Illinois-grown and fresh, all year long. Living Waters Farms’ greens are grown hydroponically, in a constant flow of nutrient-rich water.

Four mornings per week, Mark, Matthew or another person from the farm typically heads out just after 6 a.m. to deliver fresh greens to about 40-50 retailers, produce distributors and top restaurants around the area. It’s an all-day affair, but that doesn’t stop Mark or the others from helping out other local farmers by picking up eggs and milk to deliver on their route.

WASTE NOT, WANT NOT

For Living Water Farms, sustainability is one of their top priorities. The first thing they did was set up geothermal heating and cooling for their greenhouse, utilizing the natural temperature of the earth to heat and cool the greenhouse efficiently. The family follows a “waste not, want not” philosophy, using organic, compostable soil cubes that allow them to recycle everything back into compost when the seedlings move from soil to water. Their irrigation water is on a closed loop, which helps them conserve, sterilize and re-circulate almost all of the water back to the plants.

As a result, Living Water Farms uses a fraction of the amount of water used to grow typical crops. Any unsold food they grow is donated to the Midwest Food Bank.

“Over the course of the week, we usually have about one to two pallets of excess product that we pack up and send to the food bank,” said Mark. “From there it goes to food pantries throughout Illinois and border states. They are always thrilled when we can bring in fresh produce.”

With hard work, Living Water Farms has had success and is working to expand the business from its current greenhouse to one almost 16 times larger. That will allow them to grow produce in greater quantities and add even more variety to their offerings.

To get expert assistance in this growth process, Mark became a fellow in the Good Food Business Accelerator, the nation’s first business accelerator focused on building supply chains for sustainable, local food. The Good Food Accelerator was developed by FamilyFarmed, one of Farm Aid’s partners. As a fellow, Mark worked for six months with industry-leading mentors to develop and focus on an expansion plan. 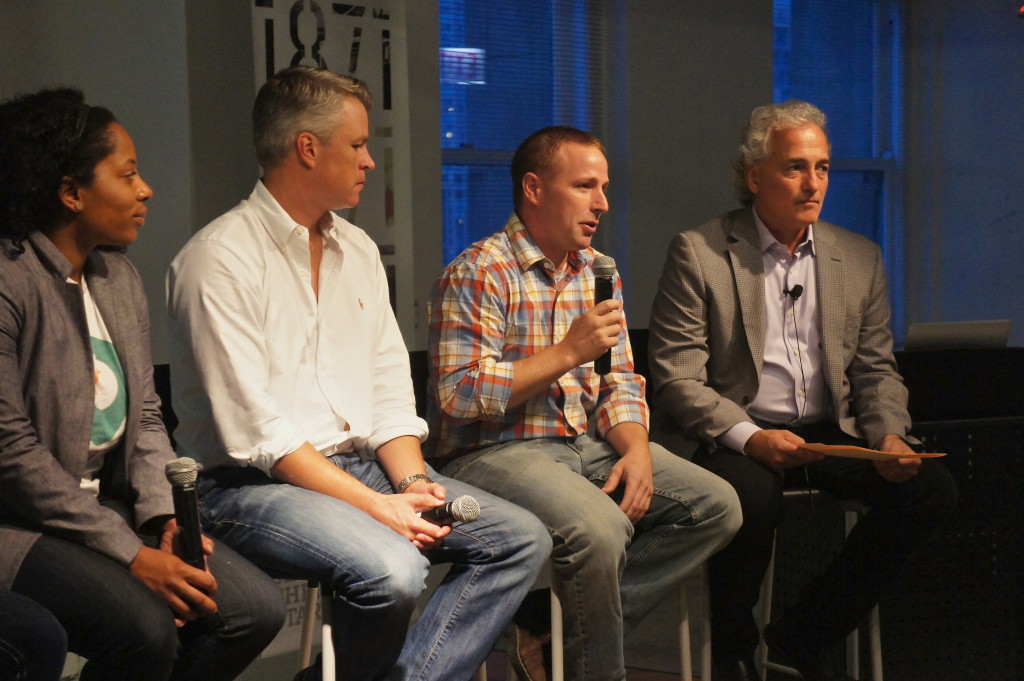 Mark Schneider (second right) of Living Water Farms — subject of this article — participated Sept. 8 with other Fellows from the first year of FamilyFarmed’s Good Food Business Accelerator at an event promoting applications (accepted through Sept. 18) for the program’s second season that begins this fall. Also pictured (left to right) are Fellows Riana Lynn of FoodTrace and Shane Christensen of dailyServing and FamilyFarmed President Jim Slama. Photo: Bob Benenson/FamilyFarmed

“It’s a big difference to go from what we have now to a 160,000 square foot greenhouse,” noted Mark. “We developed a business plan that we could use both for financing and for going out and pitching the [new] business.”

A bigger greenhouse isn’t the only thing the family has planned for the farm. Their sustainability efforts will be strengthened at the new facility, which is heated by generators that are powered by methane and waste to provide energy 365 days a year. They also hope to add wind-powered generators as a more cost-effective energy source.

“Small family farms pioneered sustainability, we just continue to build on that and be as efficient as we possibly can,” said Mark. And of course, that sustainability has a lot to do with his families’ future as well.

Being a family business presents a unique set of challenges, but they learned the importance of defining roles and responsibilities early on to help with differing opinions and resolving conflict. Still, Mark is quick to note that working with his family is generally a lot of fun and has given them all a deeper, more multi-dimensional relationship. And, he adds, as with any small business, a lot of it comes down to managing the farm well and paying attention to key performance indicators to make sure the farm is where it needs to be on a daily and monthly basis.

Although their farm is doing well, and as the large family likes to say, “Many hands make light work,” as any farmer will tell you, their job is not an easy one.

“I spent five years as a career going into burning buildings. When I took up farming, my stress level went through the roof,” Mark laughed. “There are a lot of unmanageable factors that we can’t control and there are certainly a different set of challenges…but we feel good about the work we are doing. We feel good.”