Rick Bayless‘ mastery of regional Mexican cuisine at Chicago’s Frontera Grill, Topolobampo, and Xoco has made him one of the nation’s most celebrated and best-known chefs. He also is a Good Food advocate who is greatly concerned with the welfare of family farmers and the integrity of the food we eat. He thus was distressed by a court ruling that overturned Mexico’s two-year-old ban on genetically modified (GMO) corn, and expressed his concerns in this column first published on his rickbayless.com website on Aug. 22. FamilyFarmed is republishing his opinion piece with permission.

Good Food on Every Table also published an article on May 7 that highlighted Rick Bayless’ pioneering role in establishing a market for local, sustainably produced food in the Chicago area by purchasing from small farms in the region. Click here to read about his efforts.

In Mexico yesterday turned out to be a very sad day — some would say a day of immeasurable cruelty. A judge overturned the 2013 ban on growing GMO corn, in the country that gave us corn, that offers us more corn diversity than anywhere on the planet. What do we have to look forward to now?

First, fewer of Mexico’s unique landrace varieties will be grown. GMO corn is so seductive to farmers. It’s usually easier to grow, more disease resistant and more productive. Why bother, then, with all the hundreds of local varieties, each evolved to provide Mexico’s grain staple for a unique parcel of land, a unique climate, a unique community? 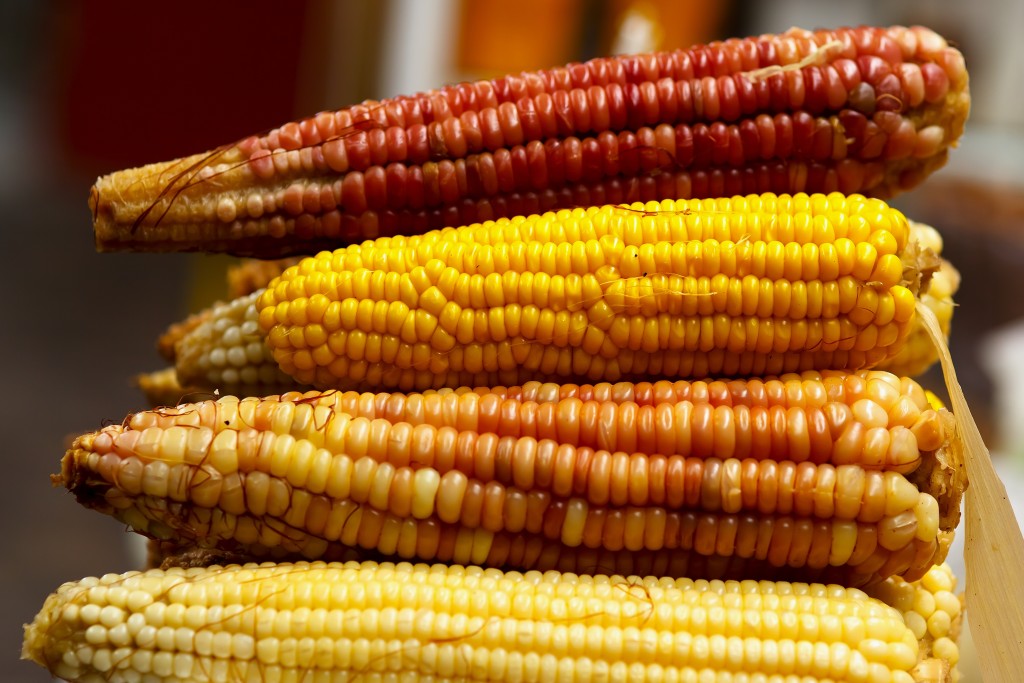 All corn is not the same. Mexico produces a wide variety of colors and flavors that chef Rick Bayless thinks will be at risk from the adoption of GMO corn there. Photo: Frontera via Shutterstock

If we’re only talking productivity, there’s little reason to bother with them. But a myopic pursuit of productivity hasn’t always proven wise. Especially when a crop is so thoroughly identified with a culture. As they say in Mexico, “Sin maíz, no hay país,” “Without corn, there is no country.” 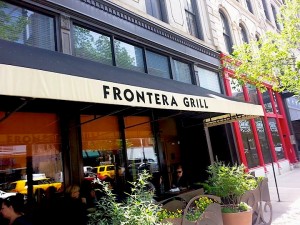 If (when?) GMO corn eventually blankets mountains and valleys, high plains and jungles of Mexico, what will this uniquely diverse “culture of corn” have become? Perhaps more than anywhere on earth, Mexico has experienced thousands of years of vital cultural heterogeneity — Aztecs, Mayas, Zapotecs, Mixtecs, Totonacs, Huichols, Triques, Purepechas, to name a few, overlaid with Spanish, French, North American, Lebanese and more). Will we see that Mexico’s beautiful diversity has faded into bland homogeneity, bland and characterless as the lab-manufactured corn that’s providing daily nourishment? 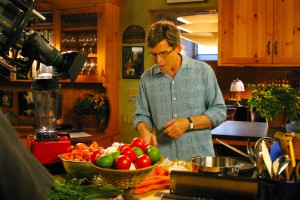 Rick Bayless’ long-running PBS cooking show Mexico: One Plate at a Time spread his fame well beyond his Chicago base. Photo: Frontera

Second, no matter what you think of GMOs (I think the topic is way more complex and less straightforward than some may suggest), we can be certain of one thing: Genetic drift from GMO corn will likely contaminate some of the Mexico’s hundreds of unique corn varieties, rendering them compromised at best when we need these uniquely hearty soldiers to defend against unforeseen blights or to offer unthought-of options as climates and soils change.

And third, I think it’s pretty certain that GMO corn in Mexico will rob us of flavor. Now, I know in the United States until recently, we’ve opted for big and beautiful and durable and shippable over anything flavorful. But now there is a groundswell of voices who are taking a stand for quality of life. Delicious flavor makes life worth living, and anyone who says differently is either a ruthless capitalist or simply not paying attention. 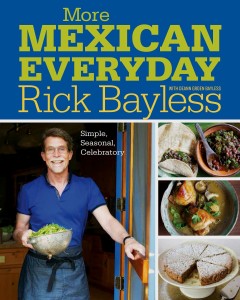 More Mexican Everyday, the latest of a series of cookbooks by chef Rick Bayless, reflects the increased availability to U.S. consumers of fresh, authentic Mexican ingredients.

Until someone offers me a GMO corn with the wonderful richness of bolita from Michoacan or popcorn nuttiness of tuxpeño from Oaxaca, I think that corn has little to offer. Maseca brand masa harina has sadly already had far too much luck convincing Mexico that one single, solitary bland corn flavor is all Mexico needs. Planting GMO corn through out the country may be the last and final argument in that discussion.

We all do what we can. At our restaurants in Chicago, we buy organically grown landrace corn from Michoacan (thank you Masienda for searching it out and importing it for us!). It’s boiled and stone-ground in the ancient style. And we hand-press and griddle-bake tortillas from that beautiful nixtamalized corn during lunch and dinner service.

Preserving heritage, whether in Mexico or here in Chicago, preserves not only a way of life, but the opportunity to appreciate the full range of delicious flavor this world has to offer us. 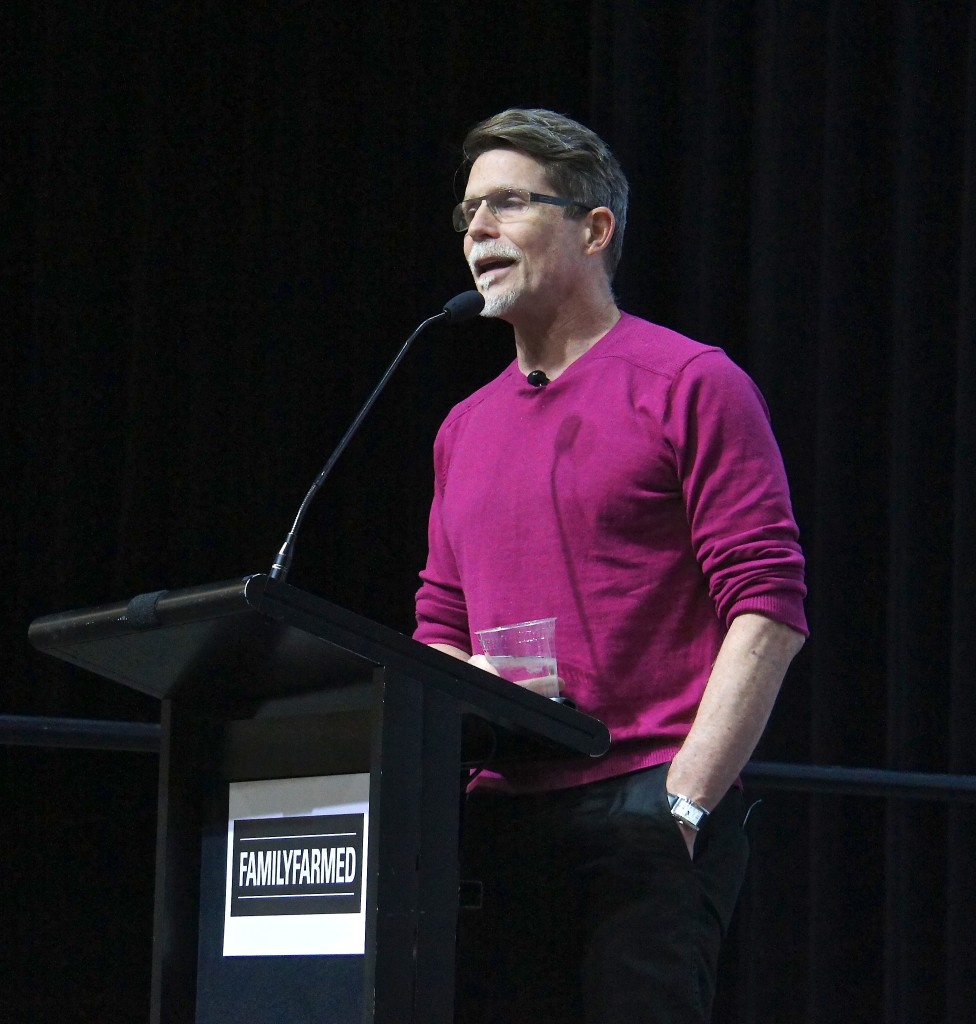 4 thoughts on “Rick Bayless: Overturned GMO Ban Is A Sad Day For Mexico”