These rules for Preventive Controls for food processors make up the first in a two-stage process that is expected to be completed in late October with release of the final food safety regulations for produce growers and handlers.

The National Sustainable Agriculture Coalition has been deeply engaged in this rule-making process for five years defending the interests of sustainable producers and small and medium-sized growers, to make sure the financial and logistical burdens placed on them by the new law are understood by policy makers and mitigated to the greatest extent possible. 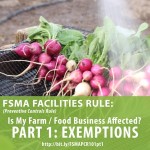 The organization’s advocacy played a major role in halting an original set of rules proposed by the FDA that were viewed as threatening to place overburdening costs on small producers, and sending the process back to the drawing board.

So there is no better source for information about the new regulations, to whom they apply and what they require than the National Sustainable Agriculture Coalition, which this week published a three-part series of blog posts on the subject that we share with you here. 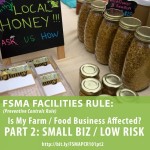 Part one, published Monday, addresses those farms and food enterprises that are exempt from the rule. 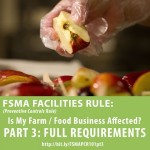 “If you are in the business of growing, producing or manufacturing food, becoming knowledgeable and up-to-date on FSMA and what the Preventative Controls Rule and the Produce Rule say is an absolute must,” said Wes King, executive director of the Illinois Stewardship Alliance and co-chair for the National Sustainable Agriculture Coalition’s Marketing, Food Systems, and Rural Development Committee.

If you are directly affected by the new FSMA rules or simply have a strong interest in food safety, we urge you to click the links above and read all about it.