Kara Gunthorp joined the family sustainably raised livestock business — Indiana’s Gunthorp Farms — shortly after her graduation last year from Purdue University, an experience she shared in the initial article in our Growing Young Farmers series. Kara is making a return appearance here, discussing how her younger brother Evan has also joined in the family’s farm legacy. The article includes a Q&A that Kara conducted with Evan, whose responsibilities — at the tender age of 20 — include the USDA-inspected processing plant that the Gunthorp family built and owns.

I can tell you a lot of stories about my childhood on the farm, but if I were limited to stories that did not include my brother, I don’t think I would have any good ones to share. Evan is only two years younger than me and when we were little, we spent a lot of time together.

One incident that sticks out in my mind is when we were probably four and six years old. We were playing in the barn, and climbed up on top of the straw bales. All of a sudden, Evan walked to the edge of the bales and pointed down. Of course I wanted to know what he was looking at, so I followed him to the edge. When I got there, what did my twerp of a little brother do? Nothing other than push me off the platform of bales and onto one of the large pigs below us.

The next 10 seconds were a blur as I screamed and sprinted towards the gate. Now, let me tell you, I was a very scrawny six-year-old. That gate had to have been taller than me. But fueled by pure adrenaline, I threw myself over the gate in one swift motion. As I looked back, the big pig was still standing where I fell on it. (It probably didn’t even notice me; I really was pretty tiny.)

Why does this incident stick out in my mind? I don’t know, probably because six-year- old me thought I narrowly escaped being eaten by a pig. But now that I can laugh about it, I recognize that Evan has always been pushing me. Not physically off stacks of straw, but as we’ve grown up and especially in the past eight months since I’ve returned to the farm full-time. 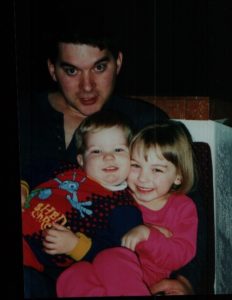 As a young child, Kara Gunthorp — the author of this Growing Young Farmers article — shared father Greg Gunthorp’s lap with her brother Evan. The two are now grown and work for their father at Gunthorp Farms, a sustainable livestock operation in LaGrange, Indiana.

Working with my “little” brother has been one of the best parts of my job. He has more years of hands-on experience than I do, so I am constantly bombarding him with questions.

And just like that day in the barn, he never pushes me into something unless he knows I can do it. Did I think I was capable of jumping the fence? Absolutely not. Just like there are things that I run into now that I don’t think I am capable of doing. But Evan is always there to give me a nudge and let me try it for myself. And much like I cleared that gate, I normally find that I am capable of things that I wouldn’t have realized if Evan hadn’t pushed me to try.

My dad Greg had surgery on his knee on Dec. 2. The surgery was long overdue, partially because Dad simply refused to be restricted during the summer or during the madness that is Thanksgiving turkey season. I know he was worried about how we would do without him for a while.

I am very pleased to tell you that everything has been running smoothly without the help of Dad, largely because of Evan stepping up to the plate. He trained employees to run the plucker and the scalder during poultry slaughter. He took over our testing program. He runs the smokehouse on his own. Evan had some really big shoes to fill, and he did so without complaint.

Evan is always the behind-the-scenes force who gets things done at Gunthorp Farms. He does so with too little sleep and often too little appreciation.

Lately, we have gotten quite a few “testimonials” from customers about how smoothly things seem to be running since Evan and I have taken a bigger role in the family business. Let me tell you what, I might be behind most of the communication with our customers, but Evan is the one who keeps things running smoothly, and all of us at Gunthorp Farms appreciate that more than he knows.

The following is an excerpted interview I conducted with Evan for this blog post:

How long have you worked at Gunthorp Farms?  I started full-time on the payroll after my junior year of high school in June 2014. The key term there is “on the payroll.” I started feeding chicks in the brooder barn on a daily basis in second grade, and I’ve been helping Dad long before I started kindergarten. (Side note: Evan, who turned 20 on Dec. 19, has been a full time employee since he was 17 years old.) 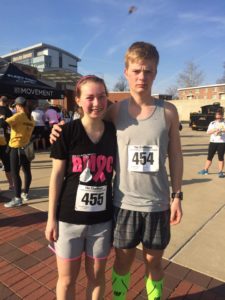 Kara and Evan Gunthorp remained close as they grew up, which has facilitated their working relationship as young employees of the family’s Gunthorp Farms.

What do you do at Gunthorp Farms?  My official job title is plant manager, but that’s more so for Brushy Prairie Packing (our processing plant business’s name) than for Gunthorp Farms. I would consider “Plant Manager” less than my full job description, though it is a majority of my hours and most of my work. I oversee the employees on a day-to-day basis during slaughter, processing, cleaning and everything else that occurs within the processing plant. I am in charge of regulatory compliance with USDA, human resources, corresponding with customers on processing questions, relaying weights to billing, and repairs.

On the farm side of the things, I am the purchasing director, so I am the only one who can give final clearance on purchases. I also help the farm guys with scheduling and oversight when needed. I am involved in planning for the farm and figuring out how the farm and processing plant can work together.

FamilyFarmed is asking for articles to include in their “Growing Young Farmers” series. You’re obviously young, but do you consider yourself a farmer? Yes and no. By my own definition, no, I’m a plant manager/corporate director. But in the grand scheme of things, if you take out the people like me, how many farmers are there really? I still dive into some production activities too and provide some oversight for the farm employees. I’m also involved in decision-making for the farm. When we’re shorthanded over the summer, you can find me helping set up waterlines or moving ducks to pasture. When I was still taking classes in Fort Wayne, I would almost always drive “around the block” to see the animals, because I knew I might be able to spot issues that someone who didn’t grow up around animals their whole life could miss. I think “farmer” is more so a mindset, if you have the skills you will put them to good use.

When you were little, what did you want to be when you grew up? A farmer. Definitely.

Do you still want to be a farmer when you grow up? What is the definition of a farmer? I think a farmer is all encompassing and I want to be involved in agriculture, both on production and processing. I would like to someday be more of a “macro-manager,” so I could oversee both the processing plant and the farm. I see what needs to happen day to day, but I also see the big picture. I want to make the big decisions that help make the day-to-day tasks possible and efficient.

Dad has spent years making a name for himself in the farm to table movement. Do you see yourself becoming an advocate in the industry as well?  I don’t think I’ll hop on as many planes as him, but I think one of the biggest things you can do as far as advocacy work is just to do the very best in what you’re doing. Some people go out and talk about what needs to happen. I want to be the example they talk about and the pictures they show. I want to prove that it is possible to have a very small, USDA-inspected processing plant and that it’s actually happening.

What was it like taking on management responsibilities at such a young age?  It was very difficult in the beginning. We probably brought on a lot of our own problems because we didn’t have a well-established hierarchy. That was my biggest challenge, creating a hierarchy. People respect me now. They know that I know what I’m doing. They know that I’m on their side. If they mess up, they know that I want to help them and retrain them so they can do better. I made friends before I made employees. While I was making friends with them, I didn’t really have their respect yet so I had to help them learn what to do, I couldn’t just tell them what to do.

What’s your favorite part about working at Gunthorp Farms?  Seeing the job well done. When the truck goes out early, when the orders are filled correctly, when the customers are happy with our products… that’s the best part. It’s nice knowing that what we do isn’t the norm for the industry and we’re still making it work. We’re not at a point where economies of scale help us out any and we’re not at a point where the processing equipment manufacturers even think about us, but we’re still succeeding.

What is the biggest challenge that you face with working at Gunthorp Farms? Getting people who see the vision. People need to see what we’re here for. It’s not hard to get people to come in and do menial tasks, but it’s hard to find someone who has any passion about what gets sent out the door.

Do you have any generic advice for someone who is looking to work in this small farm industry, whether that be in the production or processing side of things?  You can never be too well-prepared. You’re never going to look back at yourself yesterday and get mad at yourself for doing too much of today’s work.