An anniversary is an occasion for celebration. And that is just what Chicago’s Local Foods will be doing this Saturday (June 24) to mark the 2nd anniversary of its retail store in the city’s Bucktown neighborhood.

The Tacos & Tiki party, scheduled from 2 p.m. to 5 p.m., will feature a pig roast by Greg Gunthorp of Gunthorp Farms, a leading regional producer of pasture-raised, organic livestock. The meat will be turned into tacos by Chef Andres Padilla of Rick Bayless’ Frontera Grill and Topolobampo. Tiki drinks will be creating by Matty Eggelston of Spilt Milk, one of Chicago’s leading mixologists.

There will be tiki cocktails; craft beer from Chicago’s Hopewell brewery and craft cider from Michigan’s Virtue; kids’ crafts from Creative Scholars, a pre-school program located near the store; and educational demos from Growing Power, the pioneering urban agriculture nonprofit. All this, plus live music.

“It will be a big old meat, food and booze party in the parking lot,” said Rob Levitt, whose The Butcher & Larder meat shop is a big draw for the Local Foods store. 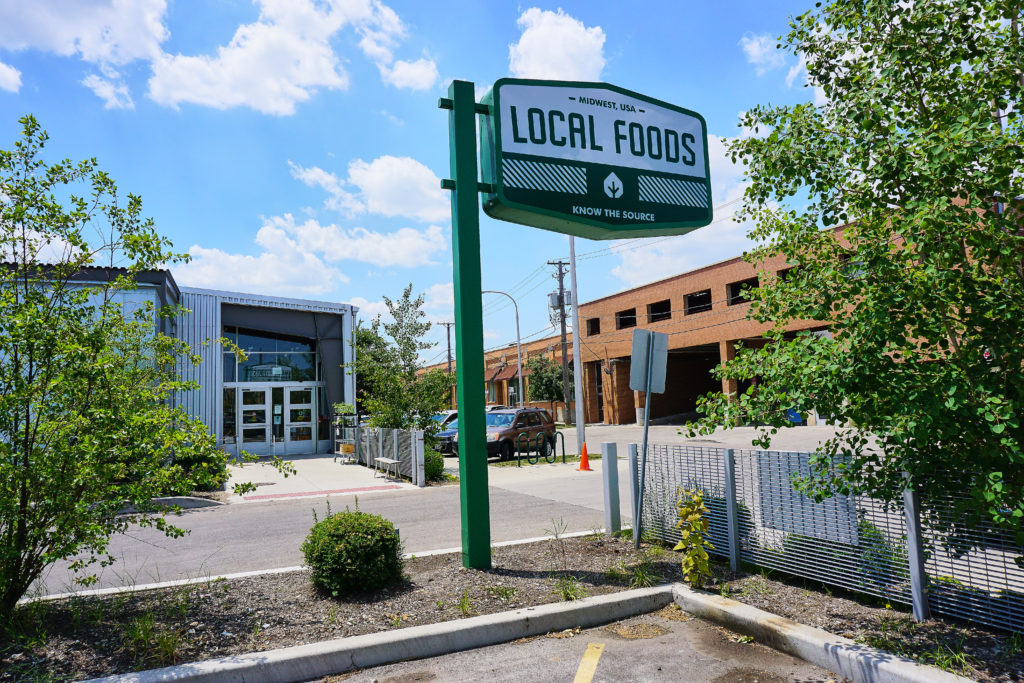 The Local Foods retail store, opened June 30, 2015, is an extension of the distributor of the same name that specializes in locally and regional produced foods. Its location at the east side of Chicago’s Bucktown neighborhood is currently a little off the beaten track, but the area is poised for a development surge as nearby longtime industrial properties are converted to other uses. Photo: Bob Benenson/FamilyFarmed

Anniversaries are also times for reflection, though. As CEO Andrew Lutsey looks back, he views the first two years as successful, but says that it has been a learning experience that has produced some changed expectations and priorities.

As for the successes, Andrew noted, “We’ve nearly doubled sales in the last two years on a monthly basis. We’re continuing to grow our business to restaurants and hotels and food manufacturers and grocery stores. All of those folks are still catching on.” He added, “Now we’re moving into bigger institutions and people who are ready to move the needle in a bigger capacity for Local Foods.”

The store’s growth has also been a boon for the Chicago region’s producers: Local Foods topped $10 million in purchases from local farmers in late 2016. “Our wholesale distribution business, most of that money goes back to our farmers. So we’ve been able to grow our farmers’ businesses too,” Andrew said. Stock Café, a casual restaurant located in the middle of the store, has contributed to that by using mostly ingredients from Local Foods’ shelves. 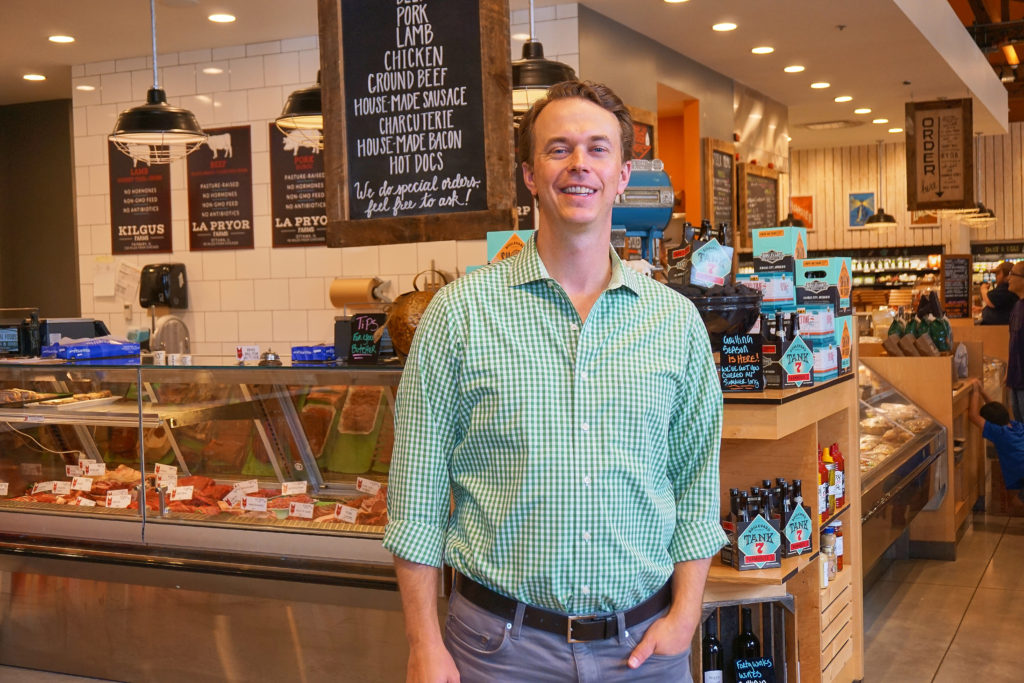 Andrew Lutsey is founder and CEO of Local Foods. His first career after graduating in 2005 from University of Colorado was in real estate investment. But he launched the Local Foods distributorship in 2012 after spending two years in sales for his family’s certified organic Waseda Farms in Wisconsin. The retail store followed three years later. Photo: Bob Benenson/FamilyFarmed

The Butcher & Larder also has enjoyed growth — in a space in which the meat cooler is bigger than the entire tiny storefront the meat shop occupied not far south before partnering with Local Foods. “For me, it’s an opportunity to have more people working and training,” Rob Levitt said. “We can do so much more. We’ve got this huge dry-cure program that’s going strong now… We have so many more cuts, we’re able to get more animals, we’re working with more farmers.”

There also have been changes. The floor space, a little barren at opening, has sprouted shelving units with packaged goods, most of them made by small Midwestern producers. The store since last year has stocked an interesting collection of craft beer, spirits and wine. 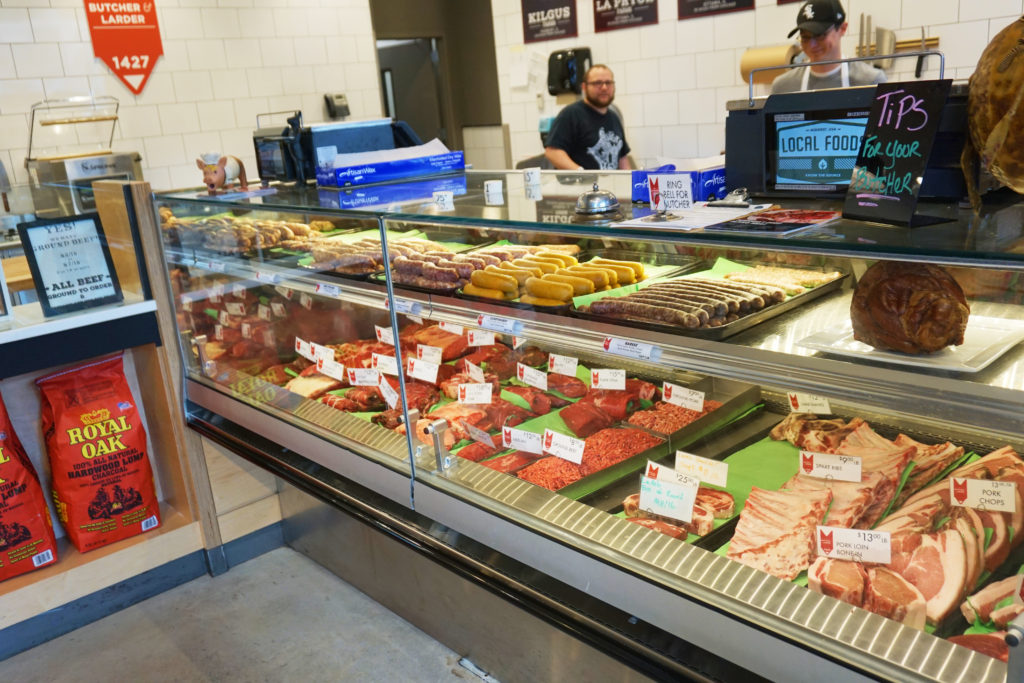 The Butcher & Larder, one of Chicago’s most popular meat shops, started in a small storefront a couple of miles south of the current Local Foods location. The partnership struck by the Local Foods team with Rob Levitt, the butcher/chef founder of The Butcher & Larder, has been one of the keys to the retail store’s early success. Photo: Bob Benenson/FamilyFarmed

And there were surprises, too.

One of these was that the premise under which Local Foods was built — that people were clamoring for more local — has turned out to be somewhat less of an absolute priority for the store’s clientele (even though most of the products stocked continue to be locally or regionally produced). 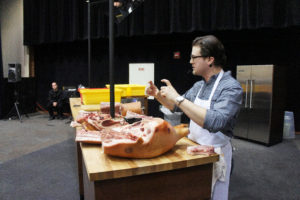 Rob Levitt conducted a demo in which he broke down a side of pork into its various cuts at FamilyFarmed’s Good Food Festival on March 18. Photo: Bob Benenson/FamilyFarmed

“When we talk to our customers, local is the third or fourth thing that came up most of the time…,” Andrew said. “People are looking for something that tastes good. If something doesn’t take good, it doesn’t matter where it’s produced, they’re not going to eat it again. After they get past taste, does it fit within my budget? Convenience also is a big factor.”

He added, “The story doesn’t always have to be local. The story could be responsibly produced and well-manufactured. There’s family farms in the middle of Kansas or Tennessee that aren’t traditionally local, but if it’s a family farm producing a great product and it’s the same ethos as the 200 farmers we support within that 250-mile range of Chicago, we’re not buying from the commodity food system here.”

The customer-first approach that Local Foods has cultivated also has contributed to the growth of a loyal cadre of core shoppers.

“People are coming to us because they want high-quality meat or they want a farm-to-table eating experience at our café,” Andrew said. “We don’t have the world’s biggest cheese selection, but we have really friendly people who have spent a lot of time curating a great selection of cheese. Pairing that with charcuterie you can’t get anywhere else and local produce and some dairy. All of those areas that traditionally are at the perimeter of the store areas, we’ve condensed down to 4,000 square feet.”

Yet the store is still committed to the “Local” embedded in its name, and touts the economic benefits of expanding Chicago’s local food cluster. “That’s hundreds and hundreds of jobs created, that 2.2 jobs for every $100,000 of local food purchases,” Andrew said. “We’re super-proud of that accomplishment. That speaks volumes about what we’ve been able to do, but also the consumer.” 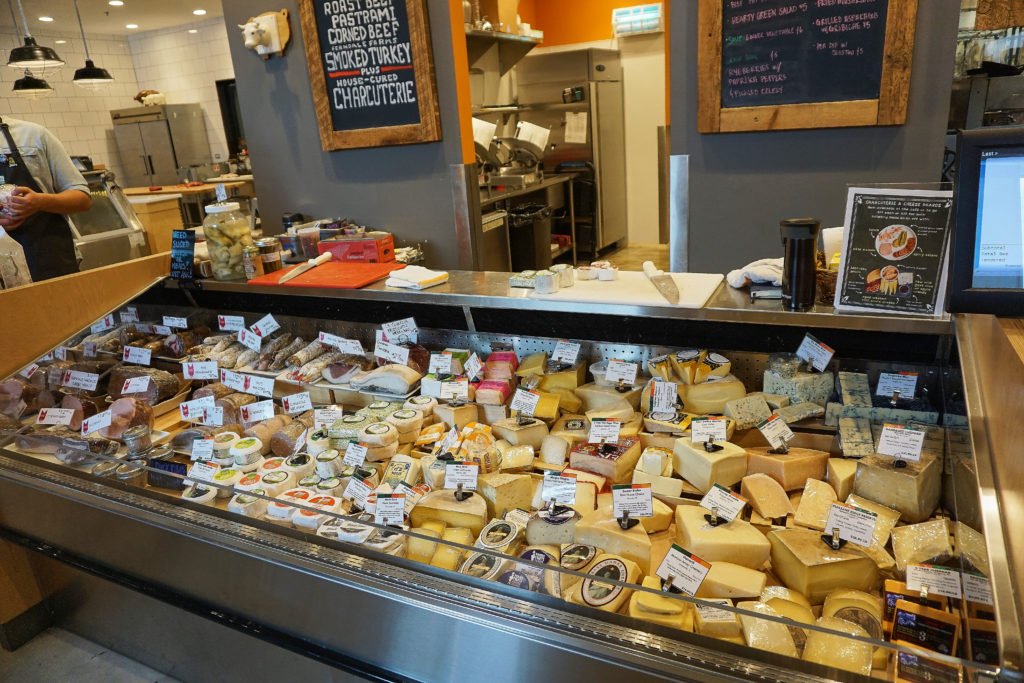 The cheese shop in the Local Foods store is compact, but filled with a delicious and intriguing selection of cheeses, most of them produced in the Midwest region, and curated by a friendly and knowledgeable staff. Local Foods recently added to the cheese section with the charcuterie and deli meats produced by The Butcher & Larder (located in the adjacent space to the left). Stock Cafe at Local Foods is adjacent on the other side of the cheese counter. Photo: Bob Benenson/FamilyFarmed 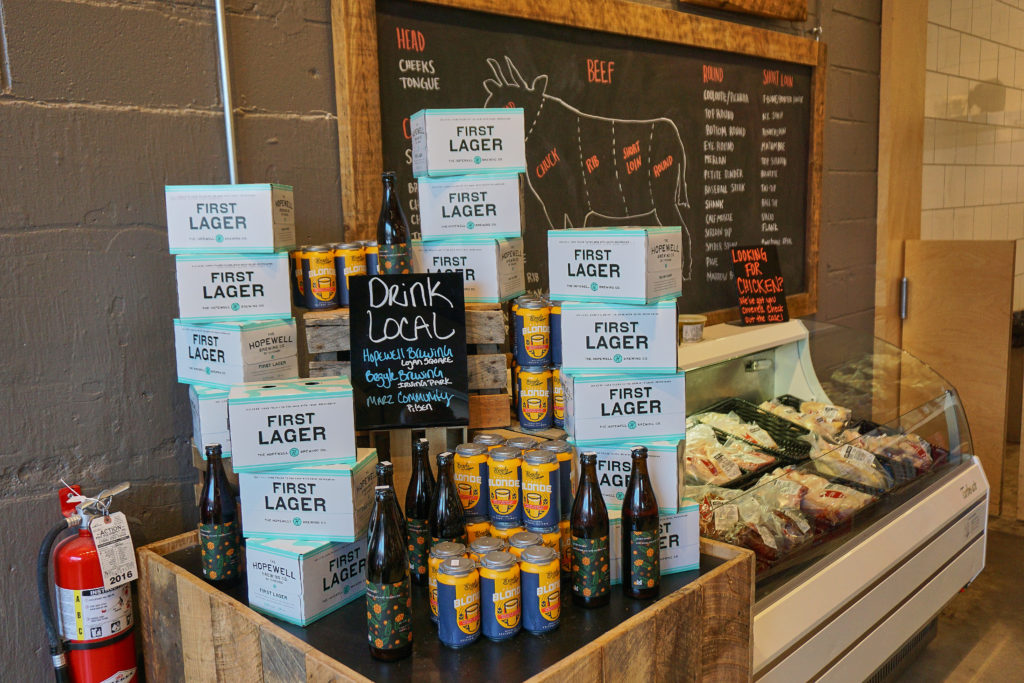 Adult beverages were added to the Local Foods lineup about a year after the store opened. Craft beer and spirits from the region are featured. Photo: Bob Benenson/FamilyFarmed