The Talking Farm is an urban farming and food education nonprofit, and it is holding a dinner for 50 on Sunday, September 10. The dinner will take place on the farm in Skokie — a near-in suburb on Chicago’s northern border — and will feature Chef Brian Huston of Boltwood restaurant in nearby Evanston.

Farm dinners have become a popular facet of “agritourism,” with farms working with chefs to bring “farm to table” dining back to the source. Dozens are held each year just in the Chicago food region alone. But most of the participating farms are well out in the country, requiring a day trip or an overnight stay.

That location is what makes The Talking Farm dinner distinctive. The farm is just outside Chicago’s city limits and a short Sunday drive for most residents of the metropolitan area. [To learn more about the dinner, including the menu, and to buy tickets, click here. To choose from a long list of farm dinners remaining this season, check out FamilyFarmed’s 2017 Farm Dinner Guide.] 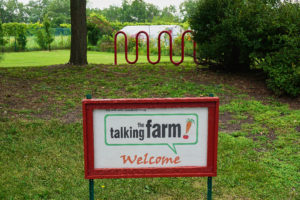 The Talking Farm is located at 3669 Howard Street in Skokie, Illinois, just north of the city of Chicago.

FamilyFarmed recently toured The Talking Farm with Farm Operations Manager Matt Ryan to learn more about its prolific produce growing and its satellite gardens at local schools. Matt started working at the farm in 2012, shortly after he graduated from the Sustainable Urban Agricultural Certificate Program run by the Chicago Botanic Garden’s Windy City Harvest program.

The farm produces a wide variety of vegetables, with kale, cherry tomatoes and summer squash prominent during our Aug. 18 visit. Matt noted that the farm will be gradually expanding into fruit and nut production, pointing out recently planted Asian pear, cherry and plum trees and hazelnut bushes. And an unusual initiative for the urban farming world will turn an adjacent woodlot into an “edible woodlands” that will produce “real obscure things” such as “pawpaws, currents, elderberries, gooseberries and cranberries.”

Matt said the site was a horse pasture in the early 1900s, and research has shown that it has never been under development. That obviated the kind of environmental remediation that was required of many urban farms in the heart of Chicago. But The Talking Farm team nonetheless had to build the same kind of raised beds as other urban farms, albeit for a different reason. “Heavy clay soil, solid clay, five feet down,” Matt said. “So it’s not the best growing medium.”

The hoop houses on the site include two that were funded by the U.S. Department of Agriculture‘s Natural Resources Conservation Service through its High Tunnel System Initiative. Season extension has been one of the biggest benefits of these covered growing spaces. “Our first harvest was April 1 on both of these, all greens, radishes, turnips,” Matt said. “We had a whole month of harvest. We’d have our first harvest in mid-May without the high tunnels.” 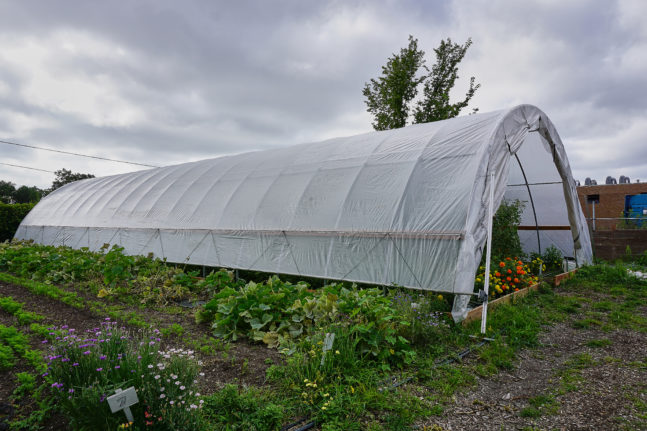 One of the two hoop houses that The Talking Farm obtained with funding from High Tunnel System Initiative, a program of the U.S. Department of Agriculture’s Natural Resources Conservation Service.

The farm also has received a grant from the U.S. Environmental Protection Agency to build a pond to retain water runoff and measure nitrates. “I don’t think we’ll have that much per se, but it’s a model for small-scale farmers and Big Ag farmers,” Matt said. “It’s going to be a talking point, and whenever we give tours, we’ll talk about the dead zone, talk about nitrate runoff, explain the issues, explain what this is doing.”

The success of the farm can be measured in tonnage. With about a half-acre currently in production, Matt said about 15,000 pounds of produce were harvested last year, with the haul expected to rise to somewhere in the neighborhood of 20 to 25 thousand pounds this year. 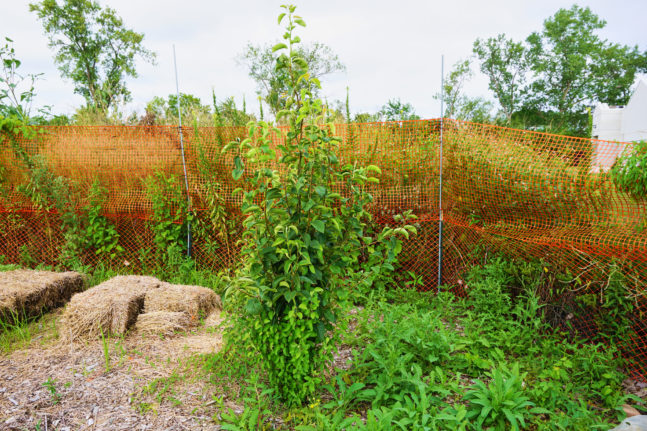 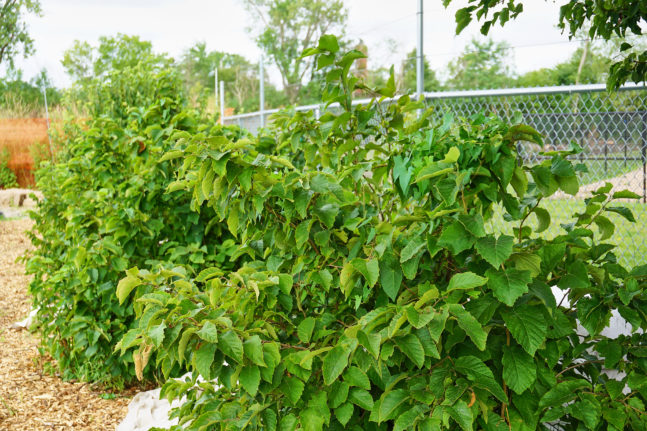 These hazelnut bushes are recently planted features at The Talking Farm, which is adding more fruit and nut production to its wide range of vegetable growing.

But growing beautiful food is only part of The Talking Farm’s work: As the name suggests, communication and conversation about the importance of locally and sustainably produced food is central to the organization’s mission. “People are always asking, ‘Why is it called The Talking Farm?’ Matt said. “Because we educate.”

The Talking Farm is so serious about its educational efforts that Matt and Susanna Lohmar, the Assistant Farm Operations Manager, obtained accreditation as high school teachers — enabling them to teach a four-credit summer class on the farm. The Talking Farm also created and helps maintain The Edible Acre, a food garden at nearby Evanston Township High School.

Another school with which The Talking Farm works is all about proximity: Its next door neighbor is a pre-school called the Tot Learning Center. “They love it, they love the flowers, they love the colors, they love walking through the hoop house,” Matt said of the pre-school kids. “They won’t even know this is not the norm” currently in our food system.

Matt also said he is struck by how much more these very young eaters know about Good Food than most adults — including himself — knew until just recently. “They know the term ‘organic,’ they know words like ‘fresh.’ I didn’t know what organic was until probably 10 years ago. I didn’t grow up learning what organic food was.” The pre-school has built on the relationship by converting its school food to organic produce. 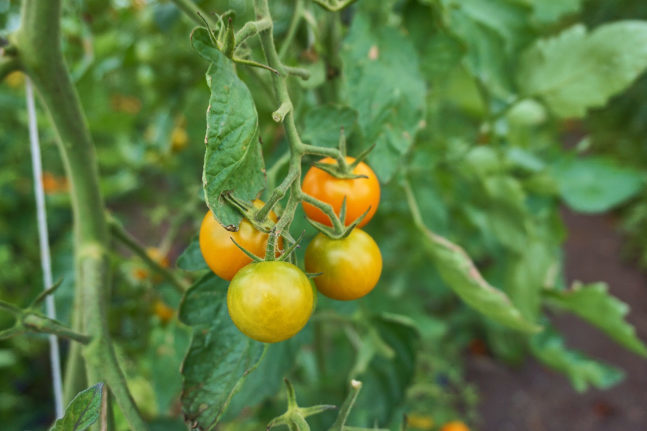 Older kids are even more deeply immersed in the Good Food culture in which they grew up. “We work with a lot of high school kids, they’re hip to most of the issues when we do discussions with them, they know the buzzwords, some of the most familiar themes of what we’re doing. Whereas I had no idea about this stuff in high school. I grew up in Evanston, I didn’t grow up in a rural area. I think it’s going much more to the forefront of people’s minds,” Matt said.

Matt also confirmed something we have been told by every other food education program that works with school children: that they take the lessons they have learned about the vegetables and fruits they have eaten home to their parents. And this is an even bigger deal when the kids have grown the food themselves.

“If they grow it, they’ll eat it,” Matt said. “If they went home and mom said, ‘Here’s a tomato,’ they’d say, ‘Nope.’ But if they grew it, they’re going to be bringing it home to mom and saying, ‘You’ve got to eat this.’ … “They’re eating it off the vines. They may not do that from Day 1, but by the end of the program, they’re eating it.”

All photographs by Bob Benenson/©FamilyFarmed 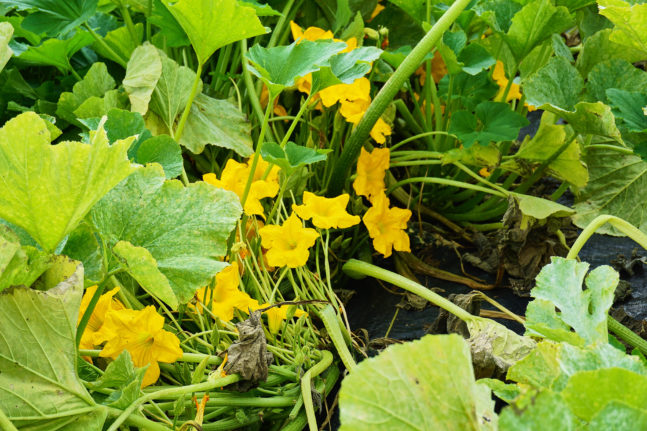 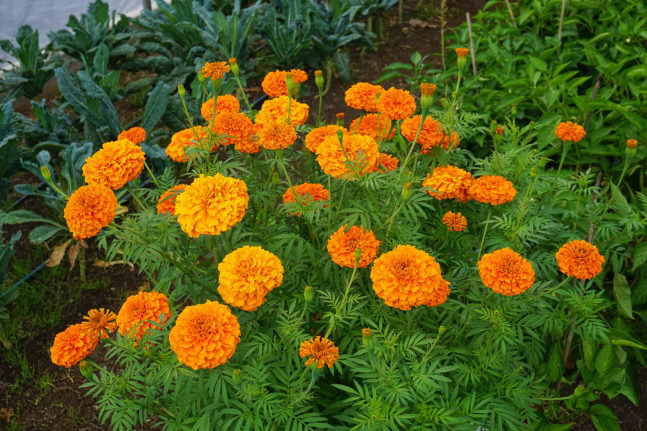 Marigolds and other flowers add bright splashes of color at The Talking Farm. 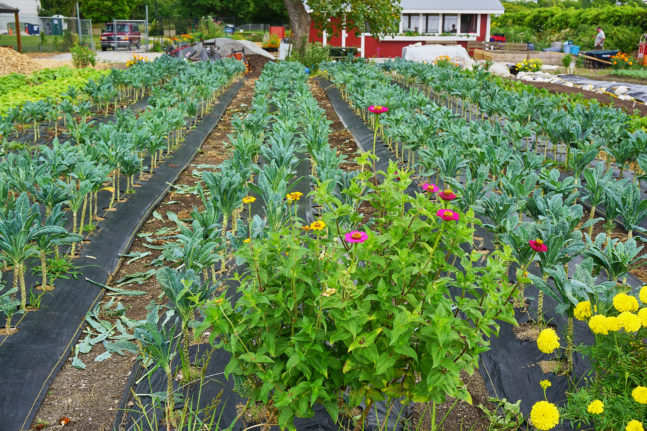 Rows of kale growing at The Talking Farm in August 2017 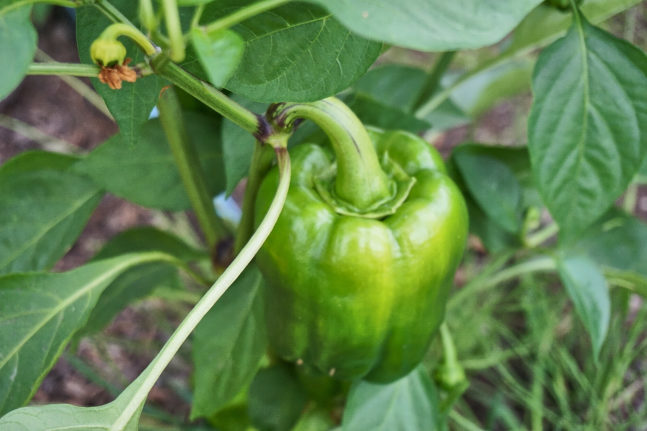