If you want to show off that you can cook like a James Beard Outstanding Chef awardee, then Cheers To The Publican is for you. 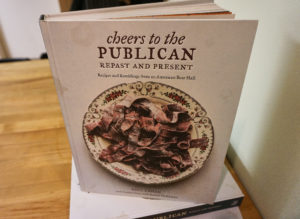 Cheers To The Publican is the first book produced by leading Chicago chef Paul Kahan. Co-authored with writer Rachel Holtzman and former Publican chef de cuisine Cosmo Goss, the book has dozens of recipes from The Publican, a farm-to-table restaurant that is part of Kahan’s One Off Hospitality Group. Photo: Bob Benenson/FamilyFarmed

The recently released cookbook is co-authored by Chicago culinary giant Paul Kahan with writer Rachel Holtzman and Cosmo Goss, now a former chef de cuisine at The Publican. Restaurants in the One Off Hospitality group headed by Paul and his business partners — which include The Publican, Blackbird and avec —  played a major role in converting the gritty meatpacking district in Chicago’s West Loop neighborhood into the city’s Restaurant Row.

As the book makes clear, Paul is a farm-to-table pioneer known for his devotion for cooking with the best ingredients available, many of them locally and sustainably produced.

Some of the recipes in the cookbook can be challenging, such as the multi-step cassoulet that takes about three days from start to finish. But most are not, and you can produce very reasonable facsimiles of delicious dishes served at The Publican.

I bought Cheers To The Publican during a Dec. 7 event at Read It & Eat, a bookstore that also stages cooking classes, located in Chicago’s Lincoln Park neighborhood. The discussion featured Paul and Rachel and was moderated by store owner Esther Dairiam, who serves as bookseller at FamilyFarmed’s Good Food EXPO in Chicago.

I wasted no time before trying one of The Publican’s signature dishes: Publican Chicken. The preparation is no more difficult than for any other roasted or grilled chicken dish. What makes it amazing is a marinade that happens to be amazingly easy to prepare. I also blended a spice mix — taken from a recipe for Barbecued Carrots — that has quickly become a go-to seasoning in my home kitchen.

I did vary from the recipes a bit, reflecting an oft-cited axiom that cookbooks are meant to provide guidance rather than religious exactitude. For instance, the chicken recipe calls for the bird to be boned and butterflied (split in half so it lays flat on the grill or in a pan). I can testify that the marinade works beautifully with bone-in chicken parts. Both the chicken and spice mix recipes called for espelette, a spicy-sweet chili of French origin; not having any on hand, I substituted Spanish smoked paprika. And the spice blend called for more cayenne pepper than I cared to use, so I simply reduced it. 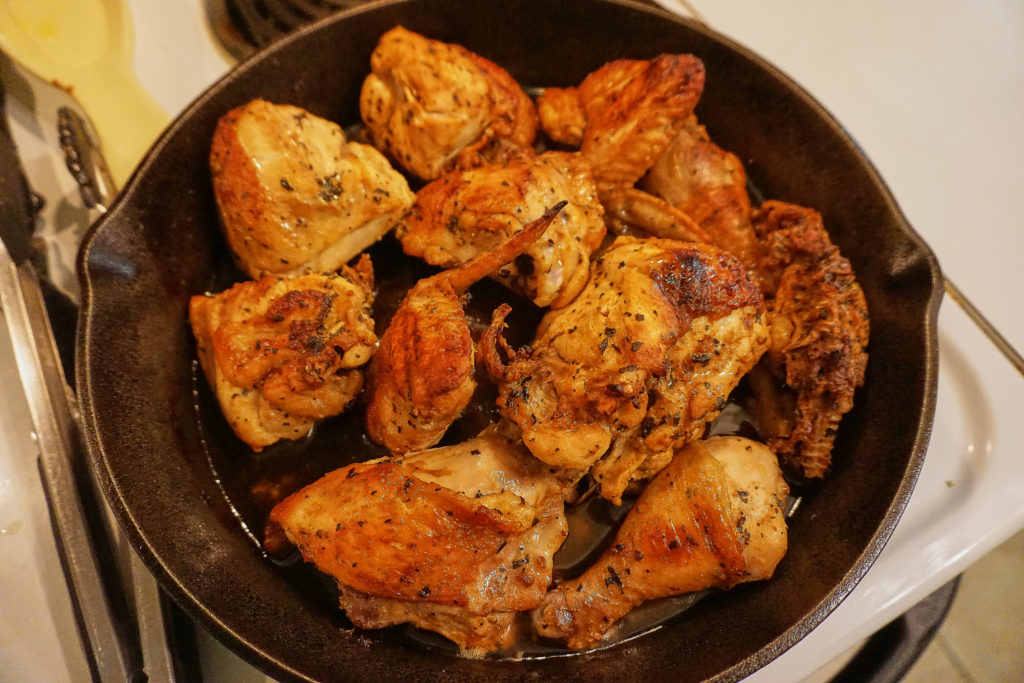 FamilyFarmed’s Bob Benenson made the delicious marinated Publican Chicken recipe from the Cheers To The Publican cookbook. The recipe calls for the chicken to be boned and butterflied, but it worked just as well with bone-in chicken parts. Photo: Bob Benenson/FamilyFarmed

Paul emphasized during the panel discussion that this is okay. “Every ingredient doesn’t have to be to the T. You might not be able to get delicata squash, use a different kind of squash…,” he said. “We don’t put that kind of stress on ourselves, we’d die of heart attacks.” 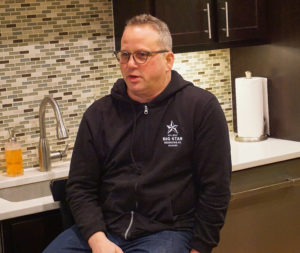 Paul Kahan at Read It and Eat bookstore Dec. 7 discussing his Cheers To The Publican cookbook. Photo: Bob Benenson/FamilyFarmed

Paul Kahan is 55 years old. He learned his craft working for Erwin Dreschler and Rick Bayless, chefs who pioneered local sourcing in the Chicago restaurant community. He has been a culinary star in his own right since opening Blackbird in 1997, has seen One Off Hospitality grow to nine restaurants (soon to be 11), and received the James Beard Foundation Award as the nation’s outstanding chef in 2013.

Yet this was the first book that Paul has written. He has had a literary agent, Janis Donnaud of New York City, for many years, but three book projects that he embarked upon never came to fruition.

While hardly shy — he is a great story-teller who passionately expresses his love for food — Paul has never gone out of his way for attention or fame. “If I wanted to be in the spotlight, you would have seen me on TV 10 or 12 years ago, because I certain had a million opportunities,” Paul said at The Read It & Eat event. “It’s about balance. I like my personal life, I love my wife and my family. I’d much rather be sitting in my yard drinking a bottle of rose with my wife, looking at the garden and my dog, than going to Los Angeles and being in a house with six chefs for a month and competing.”

Two major things happened that finally made Paul a published author and produced Cheers To The Publican.

One was that after decades of toiling daily in his restaurants, Paul took a step back into a more managerial role, entrusting the kitchens to his first-rate chefs de cuisine and sous chefs: “I just don’t spend every night in the restaurants, that intensity, that kind of physical activity that I’m not set up for any more.”

The other event was that Rachel Holtzman, co-author with chefs and celebrities of numerous books about food, also was represented by agent Janis Donnaud, who made the connection to Paul Kahan. The two clicked immediately. “He is a really great story teller, and he really adds a lot of great texture to those stories,” Rachel said. Paul returned the compliment, saying, “Rachel is so organized and so workmanlike… It makes it feel effortless.” 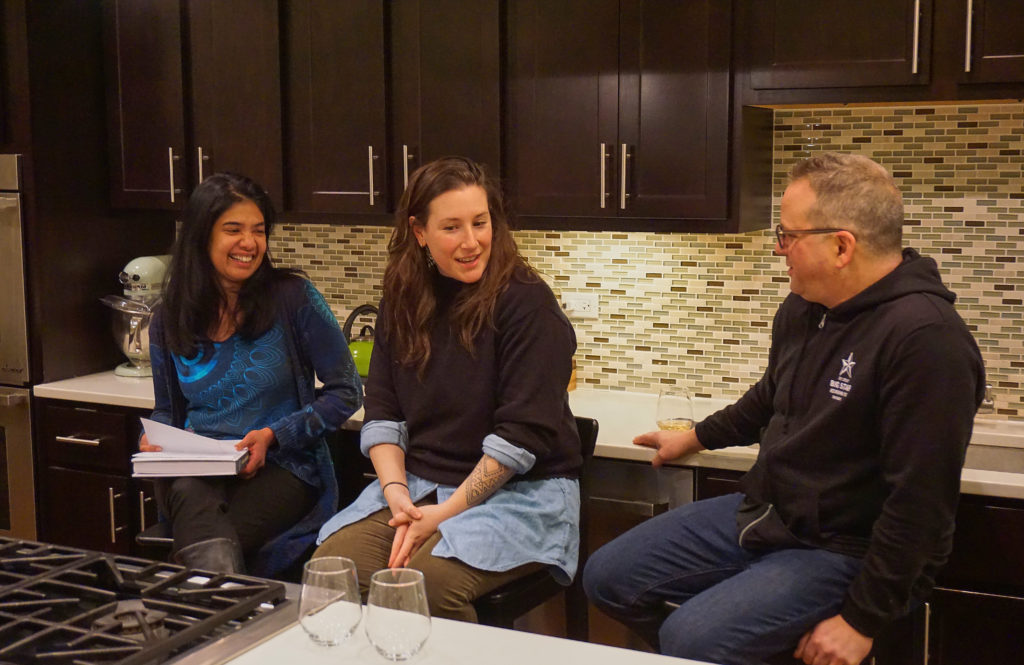 Paul also explained that he chose to focus the book on The Publican rather than broadly survey his sprawling restaurant group because it so well represents his philosophy of pursuing and obtaining the best ingredients:

“The menu changes on some level every day. In the beginning I wanted to create a sort of family restaurant that harked back to old times, a different way of cooking. The original idea was oysters, pork and beer… We sell more wine than beer now and more fish and vegetables than pork… We get so much product in that restaurant every single day. In the summer, one chef goes to the Green City Market, one chef goes to the Evanston Farmers Market on Saturday, and they both come back with pickup trucks just completely full… We also have a network of fishermen and farmers from around the country who ship stuff in on a weekly basis. On Tuesdays and Fridays we get fish from Monterey Bay, on two other days we get fish from the wharf in Boston…. There are 10 kinds of fish that are on our menu every year that never touch a single other menu in the city of Chicago.”

The Publican itself has become the hub of a mini-empire within One Off Hospitality, which includes Publican Quality Meats, a butcher and gourmet shop with a popular small café, located across the street from The Publican; Publican Quality Bread, located nearby and headed by brilliant young baker Greg Wade; Publican Tavern in Chicago’s O’Hare International Airport; and Publican Anker, a casual dining and drinking spot in the Wicker Park neighborhood. The latter is part of One Off Hospitality’s other hub outside the West Loop, which also includes Big Star, which features tacos; Dove’s Luncheonette, which has a broader menu of Mexican-influenced dishes; and The Violet Hour, whose craft cocktails helped put the term “mixology” on Chicago’s culinary map.

If you are stumped for a last-minute gift for one of the foodies in your life, Cheers To The Publican comes highly recommended.

And if you’re lucky, maybe the recipient will reciprocate by making you some of that Publican Chicken. 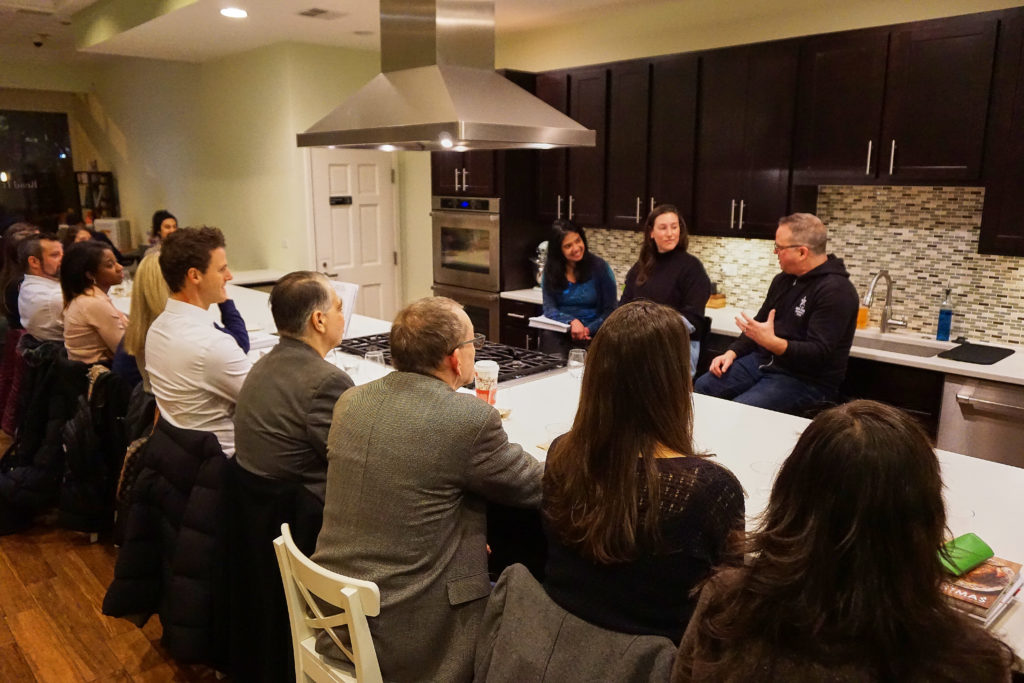 Read It and Eat, which opened in 2014, is part bookstore and half teaching kitchen and events space. Seen here during the Cheers To The Publican event, the store will be the official bookseller at FamilyFarmed’s Good Food Festival (March 24) for the third consecutive year. Photo: Bob Benenson/FamilyFarmed