John Foraker shared his experiences as former CEO of Annie’s Homegrown and current CEO of the Once Upon A Farm organic fresh baby food company (co-founded by actress Jennifer Garner) at FamilyFarmed’s Good Food Financing & Innovation Conference in Chicago on June 19. The entrepreneurs in attendance gained plenty of tips on scaling up a startup business, developing new products, taking risks and learning from what did not succeed.

They also came away with one guiding principle from a pioneer in organic consumer packaged goods. When marketing a product to the fast-growing community of Good Food consumers, make sure you have a mission statement that resonates with the health, nutrition and environmental concerns of these values-driven buyers.

“If you take away one thing, take away that you need a strong mission statement and a strong set of core values that are going to define how you’re going to operate,” Foraker said. “These are the guardrails on the road that are going to keep you from rolling off when you’re driving the car really fast around tight corners.” 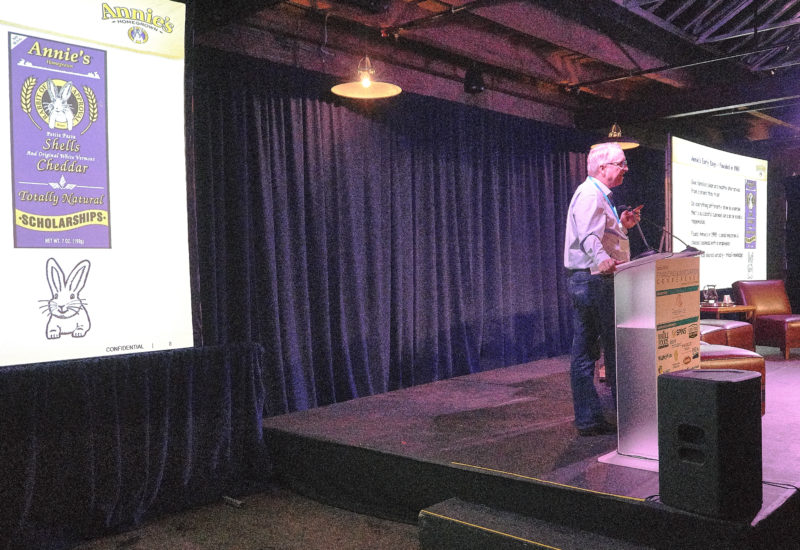 John Foraker, a pioneer in marketing organic consumer packaged goods, delivering the keynote address at FamilyFarmed’s Good Food Financing & Innovation Conference in Chicago June 19. Behind him is an image of the purple box of macaroni-and-cheese mix (with the ubiquitous Bernie the Bunny logo) from Annie’s Homegrown, which rose to organic food super-stardom during Foraker’s tenure as CEO. Photo: Bob Benenson/FamilyFarmed

Foraker noted that in the first years after he joined Annie’s as CEO in 1998, the company (named for co-founder Annie Withey) was slowly growing its market for organic versions of popular products such as macaroni-and-cheese mix. He said Annie’s growth did not accelerate until the company developed and promoted its mission statement:

“Our mission is to cultivate a healthier and happier world by spreading goodness through nourishing foods, honest words and conduct that is considerate and forever kind to the planet.”

According to Foraker, Annie’s quadrupled in sales, to $100 million, over the five ensuing years. After going public in 2012, the company was bought in 2014 for $820 million by General Mills, which has continued the company’s commitment to healthy and environmentally sustainable consumer packaged goods.

The following are other excerpts from Foraker’s keynote speech and his “Fireside Chat” with Carlotta Mast, senior vice president of content and insights for the New Hope Network (which partners with FamilyFarmed on the recently launched Good Food Insights editorial series). To read more of Foraker’s reflections on his ground-breaking career, please read the article previously published by Good Food On Every Table on June 12. 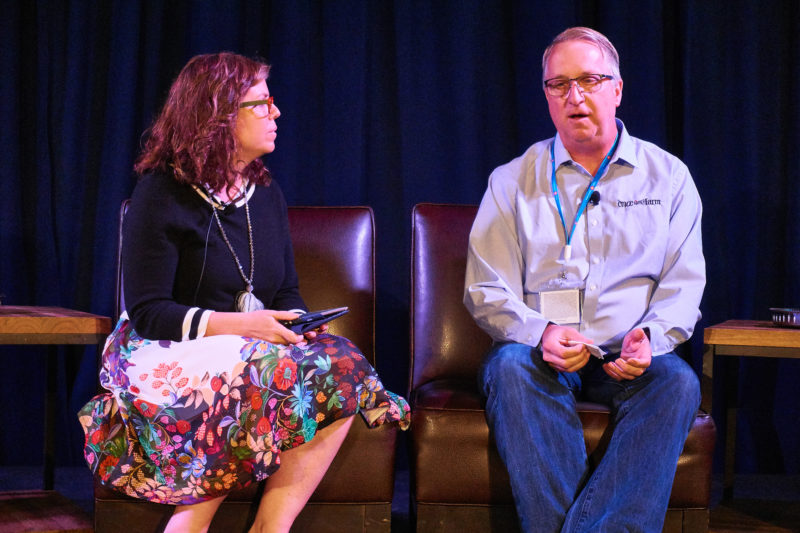 “The first thing we should have done and didn’t do is we should have put a mission statement in place… In about 2005, we put this mission statement together… We backed that up with some really strong core values that really defined our culture… These were the foundation for everything we did in the business after that. It’s really that simple. Strong mission statement. What were we trying to do, what was our purpose on the planet, and how were we going to operate.”

“Once we set those things in place, the business had run to about 12 or 13 million [dollars] by 2002, about 25 million at the time this [mission statement] was done, and by 2010 it was a $100 million business. This was the most important thing we did in the formation of Annie’s over all of those decades.”

“We had this saying at Annie’s, ‘Eat Responsibly. Act Responsibly.’… The Act Responsibly part goes to the social responsibility side. The idea that our planet is interconnected, that we have finite resources, we need to be more responsible the way we use our resources, we need to be more responsible to each other. This brand, at its essence, is about moms’ and dads’ emotional connection to kids, wanting to do better, wanting to leave the planet a better place for them than they had coming in. That basic ambition is so powerful and so fundamental to human nature, and we really tapped into that.”

“We did tons of innovation… We created a culture where you could take risks, and if something didn’t work, we’d hold hands and say, ‘What did we learn from that?’ Controlled failure, and a culture that embraces that, is one of the most important things you can take away from what we did, not just in the food space but anywhere.”

“This is probably the most important cultural thing. If you want to grow a successful business, you can never be satisfied with where you are. I looked at our Annie’s products and always thought, we can make it better. We can make the supply chain better. We worked for about six years to get to an rbST-free dairy supply chain. You can’t imagine how hard that was when every dairy plant had one big pipe and all the milk goes into it. By doing that and constantly elevating your own game, you’re going to put yourself more in a position of leading… Again it gets back to culture.”

“I can’t tell you the number of times I was in a meeting with a grocery merchandiser, buyer, whatever, and they just said, ‘Natural and organic foods is a trend.’ Maybe Chicago, maybe San Francisco, maybe L.A. We would break out demographic data and we’d show, before people were even calling it the Millennial generation, we were talking about this demographic bubble wave that was coming, and we told them, ‘This wave is going to crash on your beach.’ And this was in the mid ‘00s when we started saying this, and it was happening. It really crested and snapped the beach about the time that the recession happened, and most of the big companies didn’t realize it was happening to the extent it was because they wanted to continue to blame the recession. But it has continued and I think it’s going to continue even further.” 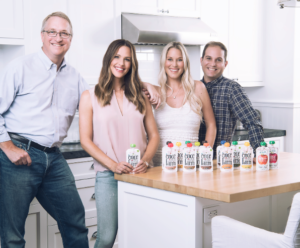 The co-founders of the Once Upon A Farm organic, fresh baby food company are (from left) John Foraker, Jennifer Garner, Cassandra Curtis and Ari Raz. Photo provided by Once Upon A Farm.

“Once Upon A Farm is a purpose-driven organic food company… In my whole career I’ve never seen such a dislocation between what consumers were interested in and wanted and what retailers were actually providing. We had almost 20,000 grocery stores in the U.S. providing fresh pet food. When I got there, maybe 400 had fresh baby food… We put together a really good consumer-driven story. Consumers are leaving the baby food category. Almost 70 percent of moms and dads make their own baby food now when their kids are born. That’s about double what it was when I looked at it in 2010… We want to provide high-quality food that’s just as good as they can make themselves, that’s fresh and highly accessible for them.”

“For you entrepreneurs, food safety is the most important thing. Don’t shortcut that. We have a really strong food safety protocol in place.”

“I believe in the power of business to do good. I also believe in the power of business to do a lot of really bad. The problems our society faces will not be solved by government alone, it won’t be solved by individual action alone. We need to get the power of corporations and the ability to design businesses with supply chains that are providing positive impacts with leaders who are using their box to stand on and shout out about important issues. I always encourage people to do it.”

“The single biggest piece of advice I could give you that we ended up doing at Annie’s and we’re going to try to do here at Once Upon A Farm, is to develop really deep, deep, deep empathy with your consumer. Really understand that consumer. We passed around a notepad the other day at Once Upon A Farm and our small team has 17 kids under the age of 5. It’s about 85 percent moms. All we need to do, really, in the short term is talk to them.”

Insights by industry leaders such as John Foraker are a big reason why FamilyFarmed’s Good Food Financing & Innovation Conference is the Midwest’s premier annual event focused on business and investment in the local and sustainable food sector. We hope you will join us for the 9th annual Conference in 2019. In the meantime, please save the date for FamilyFarmed’s 15th anniversary Good Food EXPO, March 22-23 at Chicago’s UIC Forum.