George Siemon co-founded and heads Organic Valley, the Wisconsin-based producer of dairy products, meats and vegetables that is the nation’s biggest organic farmer cooperative. Siemon does not take himself too seriously, though. You can’t take yourself too seriously if you call yourself your company’s “C-E-I-E-I-O” (a play on the familiar refrain from the children’s song “Old MacDonald Had a Farm”).

But what Siemon does take very seriously is the need to continue the expansion of the national market for organic and other sustainably produced foods, which has grown exponentially since the farmer-owned co-op was established in 1988 by Siemon and six other southwest Wisconsin farmers. And this dedication was on display at the Good Food Financing & Innovation Conference in Chicago March 24, where Siemon accepted FamilyFarmed’s Good Food Business of the Year Award and also participated in the Opening Symposium for the organization’s three-day, 12th annual Good Food Festival & Conference.

“It’s an honor to receive it,” Siemon said in remarks during the awards ceremony. “But it’s more an honor to be part of the Good Food movement. It’s just amazing how important food is. It’s amazing how many places it reaches. One of the reasons organic has gotten so big is that it touches so many values of concern to our society.” 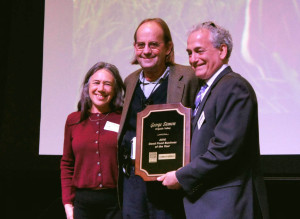 Among Siemon’s many personal contributions to the Good Food movement was his leading role in shaping the National Standards on Organic Agricultural Production, which were implemented by the U.S. Department of Agriculture (USDA) in 2002.

Siemon said during the Opening Symposium that Organic Valley has been buoyed by the growing consumer demand for organic products over the past three decades, saying, “The rising tide has certainly raised our boat.” But that does not diminish the contribution Organic Valley itself has made to developing that market.

From its origins as the Coulee Region Organic Produce Pool (CROPP) — named for the region around LaFarge in southwest Wisconsin where Organic Valley is headquartered — the co-op now has more than 1,800 farmer-owners in 35 states. Its dairy products (milk, butter, cheese, cream, grassmilk yogurt, sour cream, cream cheese, cottage cheese, protein shakes), eggs, produce and meat are on shelves of retail markets across the nation, not just in outlets such as Whole Foods Market, which features organic and natural foods, but in many conventional supermarkets as well. 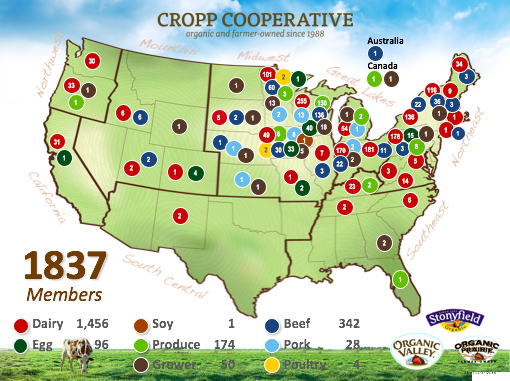 CROPP Cooperative is the formal name of the organization best known for its Organic Valley brand. As this map — displayed at the Good Food Financing & Innovation Conference March 24 — shows, the more than 1,800 farmer-owners are distributed across much of the United States, though most heavily concentrated in the upper Midwest region around Organic Valley’s Wisconsin base.

The powerful economic impact of the company’s growth has drawn attention from many quarters, some of them not necessarily expected.

FamilyFarmed President Jim Slama, during the award ceremony on March 24, recalled that a Wisconsin economic development ad, placed in Crain’s Chicago Business newspaper, touted Organic Valley as one of the state’s great success stories. The ad bore the imprimatur of Scott Walker, Wisconsin’s conservative Republican governor, who Slama joked is “not exactly one of those ‘Mother Jones’ lefties. Siemon later said, “Yes, there is a picture of me and Scott Walker looking like buddies.”

Though residing in “The Dairy State” of Wisconsin, Organic Valley did not start out as a dairy-first operation. Its initial goal was to grow produce to sell into the Chicago market about 235 miles away. But after the produce project had so-so sales, Organic Valley pivoted to dairy — in response to the increasing use of recombinant bovine growth hormone (rBGH) in conventional dairy production — with spectacular results. Over the past few years, Organic Valley has circled back around and has committed to growing its small vegetable and fruit growing operations.

Organic Valley’s packaging, much of which includes photos of its farmer-owners, is familiar to consumers in much of the United States.

Siemon describes Organic Valley as “a social experiment disguised as a business.” Organic Valley’s website describes how the co-op works as follows: “Farmer members establish equity when they join the cooperative. From the membership, a national Board of Directors is elected. Members’ opinions are carried to the Board through regional executive committees. They also have the opportunity to serve or regional committees and participate in cooperative governance and marketing.”

The website explainer continues, “We credit our success to the partnership society we’ve created between farmers, employees and citizens.” Or as Siemon himself put it, “It’s democracy at work.”

Siemon, during the Opening Symposium, outlined three challenges that needs to be addressed to keep the organic sector growing.

• Consumer education. Siemon said that consumer information is crucial in an era in which label confusion is a serious issue. Although a leader in the effort to label food products that contain genetically modified organisms (GMOs), he expressed concern that, in the minds of many consumers, “non-GMO” is taking primacy over organic as an indicator of food quality. “Non-GMO represents where food was in 1987 when we got started,” Siemon said.

• Developing a New Generation of Farmers. With the aging of the nation’s farmer population a critical issue — the USDA pegs the average age at nearly 60 — Siemon said, “We need to look for more young people to come into farming.” He said he finds encouragement in the fact that “if you look at the organic industry, you see a whole group of people who were not raised on farms.” 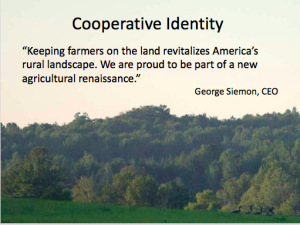 George Siemon’s philosophy about sustainable agriculture and the Good Food movement is represented by this quote from a PowerPoint display shown during the Good Food Business of the Year Award ceremony on March 24.

• Food Safety. There is ongoing pressure on farmers and producers to ratchet up their practices to make sure that the food they produce and sell is safe to consume — from the government, in the form of the U.S. Food and Drug Administration’s newly implemented regulations enforcing the 2010 Food Safety Modernization Act, and from commercial buyers, many of who are requiring more and more of the farmers with whom they work to obtain food safety certification. Siemon noted that Organic Valley has particular challenges as many of its farmers are Amish who follow traditional agricultural practices that go back centuries.

As for himself, Siemon said his position as head of a $1 billion+ corporation was an unexpected turn of events. “I was raised in a business family,” he said. “The only thing I knew is I wouldn’t be a business person when I grew up. So much for never.”

He added, “But it has been a great experience to watch business as a social change agent. Somewhere along the line I went from a dreamer to a visionary. I guess a visionary is when you fulfill your dreams.”