Tea Squares, produced by a startup company on Chicago’s South Side, is an energy snack brand with a couple of twists. First, the squares feature ingredients such as puffed millet, pumpkin seeds, brown rice syrup and organic honey; they contain less sugar and fewer calories than many of the energy bars on the market. Second, to provide a little extra boost, Tea Squares contain caffeine from the powdered tea in the recipe.

The promise of healthier snack food alone would have made business partners Jordan Buckner and Isaac Lozano excellent candidates for FamilyFarmed’s Good Food Business Accelerator; they are members of the third cohort of businesses currently participating in the intensive six-month program. But Tea Squares’ social mission was a clincher for the Accelerator’s selection committee.

That social mission is tied in part to the location of the business: on West 75th Street in Englewood, an almost entirely African-American neighborhood that has struggled mightily with economic decline, population loss and violent crime over the past four decades. Tea Squares is part of a rising effort based on one of the tenets of the Good Food movement: that food businesses can play a catalytic role in restoring economic vitality to struggling communities (both urban and rural). 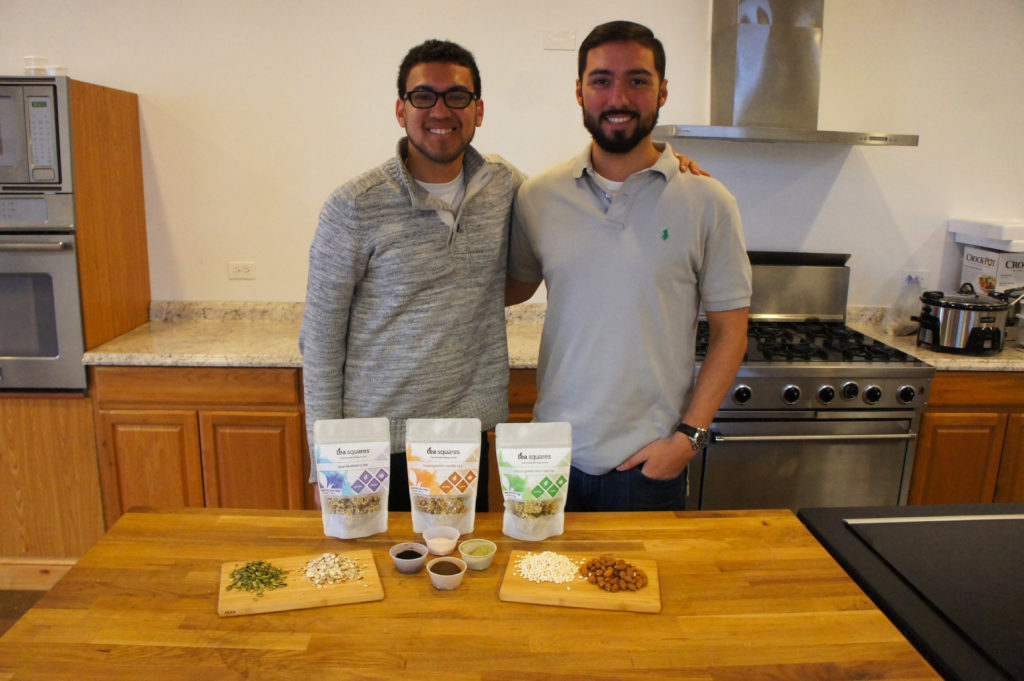 It is located not far from the Whole Foods Market store that opened last September at 63rd and Halsted — the nexus of what once was one of Chicago’s most thriving commercial districts — which is the national food chain’s first venture into a low-income neighborhood. The area also has a number of urban farms, including the nonprofit Growing Home, an organic operation that trains and provides job skills to local residents who have served time in prison or have other employment challenges.

Buckner’s mother — whose SanJustins Kitchen catering and food education company shares the 75th Street space with Tea Squares — was raised in Englewood, so he learned about both the promise and the problems of the community from an early age. 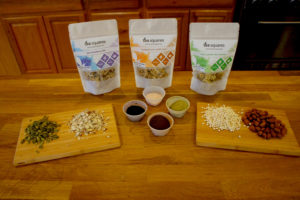 “I really got to see first-hand, essentially being here every week, the joy, the happiness that people were having, the successes in the neighborhood,” said Buckner, who is 28 years old. “But also where certain people in our community were getting left behind, not being able to find certain jobs, not being able to elevate or promote or learn along the way, and being stuck in more low-end jobs when they wanted to achieve more.”

Buckner and his partners have a stated social mission to hire from within the community. Buckner earned an architecture degree from University of Michigan and an MBA from University of Illinois, and he obviously attracts other smart people: Tea Squares’ first part-time employee is a high-school teenager named Travis England (photo below), who aspires to attend the Massachusetts Institute of Technology. 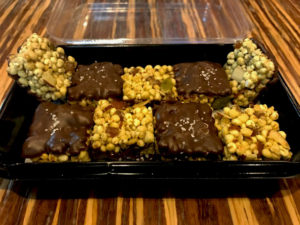 “As we scale our operations and become a much larger company, we want to at least establish an internship program that turns into full-time employment for a lot of members of our community. Maybe they start out learning how to make Tea Squares, but eventually they’re running our finance department,” Buckner said.

The company also is working to advance the health of the community by providing food and nutrition classes, utilizing the beautiful teaching kitchen at the front of the building that it shares with SanJustins Kitchen (the production kitchen for both businesses is toward the back.

Englewood was once a food desert, meaning there were no easily accessible sources of healthy, fresh foods. And though the recent arrival of Aldi and Whole Foods supermarkets have improved the situation, Englewood and its environs still suffer from above-average rates of diet-related diseases. (Just a few doors from Tea Squares, a Popeye’s Fried Chicken outlet competes with a KFC franchise.) 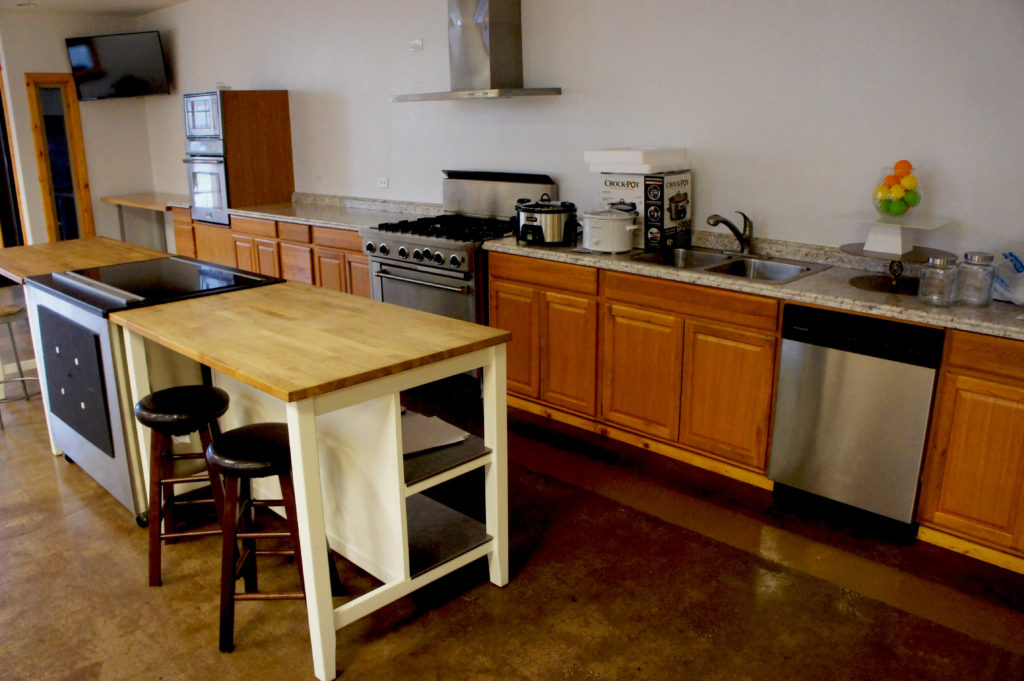 Tea Squares shares this teaching kitchen with SanJustins Kitchen, a catering and food education business run by co-owner Jordan Buckner’s mother. The production kitchen for both businesses is toward the back of the shared building in South Side Chicago’s Englewood community. Photo: Bob Benenson/FamilyFarmed

“A lot of people… have not always been taught all of the nutritional benefits of the foods and why they should eat them,” Buckner explained in describing Tea Squares’ emphasis on nutritional education. “Some 22, 25 year olds have never had zucchini before. They’ve never had butternut squash, they’ve never had a wide variety of these vegetables, because number one, they weren’t available, but two, they never really understood the benefits of actually eating them.”

Tea Squares is also working to help the youngest community residents develop healthy eating habits. “A lot of kids don’t like mushrooms,” he said. “But if you take a kid who doesn’t like mushrooms and you go to the store or even show them how they’re grown, you take that mushroom, you have them clean it off, you have them cut it into slices, and then you cook it, they are so much more likely to eat it, because they see where it’s from, they get to feel it, they get to touch it, interact with it, they can smell it. That makes a huge impact that lets you taste it and really enjoy it.” 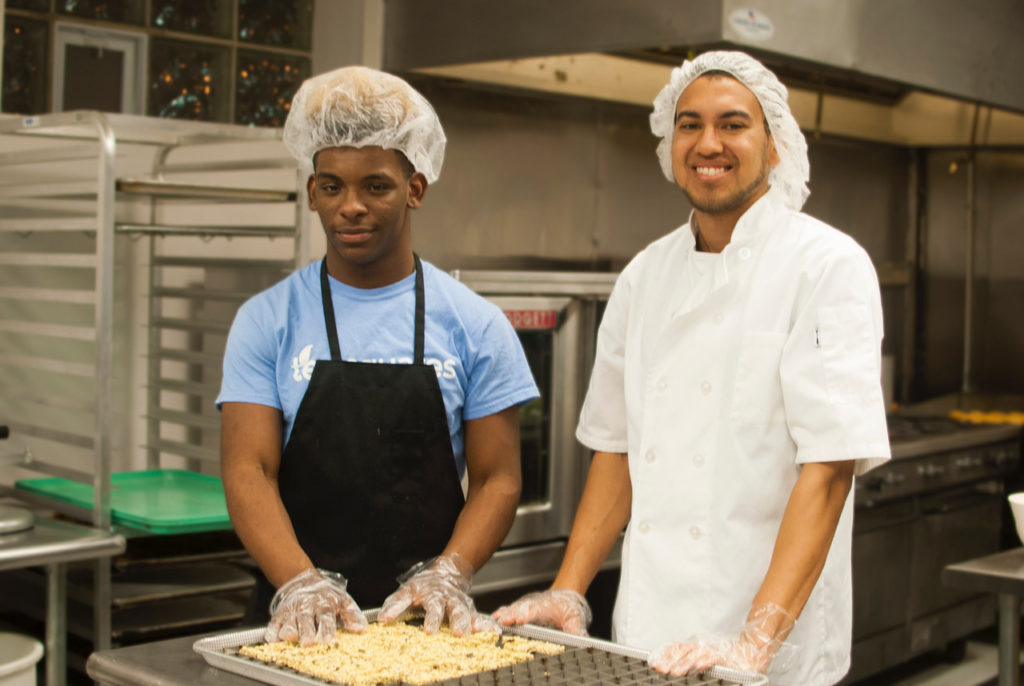 Travis England — a high school student whose goal is to attend MIT — is a part-time employee for Chicago startup Tea Squares. Here he is at work making energy snack bars with co-founder Jordan Buckner in the production kitchen in the Englewood neighborhood on the city’s South Side. Photo: Tea Squares

Buckner described how a tour for children may begin at the Tea Squares production kitchen and end at Whole Foods Englewood, so the kids can learn how the product is both made and sold. As that store approached its opening last September, its managers recruited about 30 local food producers to sell there.

Not surprisingly, one of them was Tea Squares. Englewood is now one of six Whole Foods stores in Chicago that sell Tea Squares — en route to what the partners hope will soon be city-wide placement and beyond.

Tea Squares and the other participants in the Good Food Business Accelerator will be featured at FamilyFarmed’s Good Food Festival & Conference, which will take place March 16-18 at Chicago’s UIC Forum. For more information, please click here.