When you go to a supermarket, everything seems so orderly, stocked neatly on shelves, in bins and in coolers. But behind the scenes, getting food from farm to factory to grocery store fridge — a process known as supply chain management — can be complicated and messy.

While some of the bigger food businesses handle supply chain internally, many others, including smaller and start-up Good Food businesses, turn to the expertise of consultants with years of experience. One of these is Will Madden, co-founder of Chicago-based Whole Brain Consulting. Will left the corporate food world in 2009 to start what then was Right Brain Consulting; this became Whole Brain early this year when it merged with BJH Food Safety, a complementary consulting firm started by Brandon Hernandez, Will’s current business partner.

Whole Brain provides a broad spectrum of services to food companies in the organic and natural food sectors. Will specializes in big-picture operations, supply chain management and contract negotiation between food companies and contract manufacturers (known in the trade as “co man”), and he has written a book titled, Separating the Con Man From the Co Man – A Guide to Contract Manufacturing. Brandon specializes in food safety, research and development. 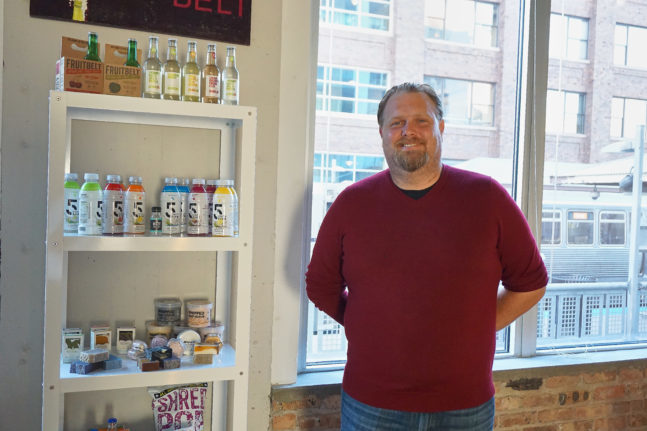 Will Madden is co-owner of Whole Brain Consulting, located next to the Chicago Avenue Brown Line El station in the River North neighborhood. Whole Brain provides a wide range of consulting services for food businesses in areas such as supply chain management, quality control and food safety. Photo: Bob Benenson/FamilyFarmed

The following are excerpts from a interview FamilyFarmed conducted recently with Will about his business’ origins, why food businesses need contract manufacturers, the biggest supply chain challenges… and why he made the highest bid for a CEO yacht cruise on the Chicago River and Lake Michigan, a silent auction prize at last April’s Frontera 30th Anniversary Celebration, a fundraiser co-produced by FamilyFarmed and Chef Rick Bayless’ Frontera Farmer Foundation.

FamilyFarmed: How did you first get involved in supply chain management and how did it evolve into this business?

Will: I was working in co-packing, director of new business. I noticed how challenged these small companies were when they came to dealing with us… They just kind of didn’t know what they were doing. At the same time, I brought home two babies back to back.

I was sitting there trying to figure out how to make vitamin claims on products that were just absolutely horrible for you… This really isn’t who I want to be. I was the guy who figured out how to keep cotton candy fresh. So I didn’t exactly have that career of being a progressive thinker moving natural and organics forward. But when I brought home my two children I was kind of like, I’ve kind of got to clean this up or I’m going to Hell. I figured if I started something like this I could skate my way into purgatory by the skin of my teeth, because I literally was what was wrong with America.

I went out on my own and all of my friends told me I was going to starve to death. There was no business and small companies couldn’t afford to pay you… I really saw this as a need… I quit my job, took another meanwhile job, one that would afford me enough free time to do this. On my drive home, I had my first client. It was one of my customers, I told him I’d quit and what I was going to do, and he said, I’d like to hire you….

It just kind of grew like wildfire. I thought there was some level of need, and it was substantially higher than I thought. As we got going, we realized there were additional need areas like QC/QA [Quality Control/Quality Assurance] and food safety. People were designing products that, I don’t think it’s a good idea putting it together like that. A lot of co man were pretty new themselves and didn’t understand the food safety component or didn’t care… We added supply chain, because people realized, “This is great, I’ve got a co man and now I’m not going to kill anyone, how much do I make and when?”

FamilyFarmed: When you were making the move into organic and natural, did you have the strong sense that the market had matured enough that it would be a sustainable business, or did you just decide this is what I want to do and I’m going to make it work?

Will: I thought if more of these companies didn’t start getting their stuff together in dealing with their co-packers, there wasn’t going to be a market… So much of your success and your failures come from your contract manufacturer… There are times when I advise a business to go with a more expensive co man, which always surprises people. It’s the best overall deal. Is this guy going to have your product on time, because an empty store shelf costs you more than whatever you’re paying is?… I like long-term sustainable relationships and I like co man who value long-term sustainable revenue… 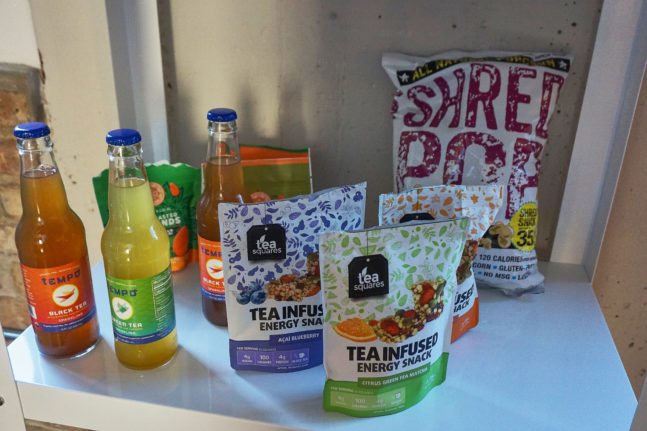 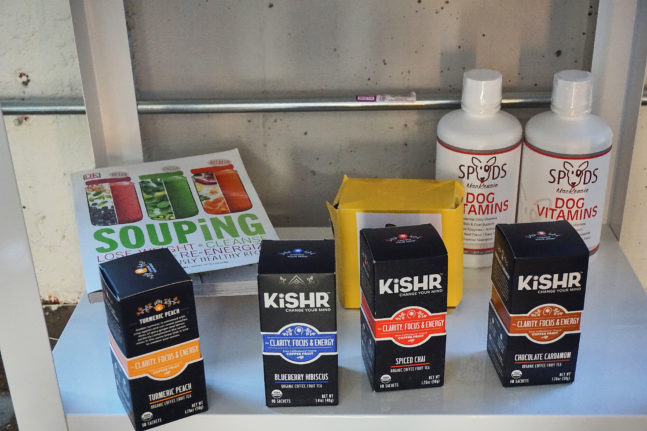 Whole Brain Consulting’s clients include some of FamilyFarmed’s Good Food Accelerator graduates. In the top photo is Tea Squares, a tea-infused energy snack (the company is currently staging a Kickstarter campaign); in the bottom photo is Kishr, a tea of Middle Eastern origin made with the fruit of the coffee plant, and Skinny Souping, whose owner, Alison Velazquez, wrote a book on the health benefits of soup. Photos: Bob Benenson/FamilyFarmed

FamilyFarmed: At what level of growth do companies outgrow co-packers?

Will: They don’t. Here’s the thing with co-packing versus owning your own plant… If a brand decides, I want to open up a manufacturing plant, number one, they have to pay people 40 hours a week whether they’re working 10, working five, whether they’re working 40. You have to pay management staff, whether they’re working five, 10 or 40. You have to build out the area, you have to have [certifications], you have to have all that storage room, you need QC/QA. You’re going to be paying people to sit on the couch one week and paying them overtime the next. You have to build the stock, you have all the raw materials on your [profit & loss statements], and all of that, you have to sell part of your company to support. Whereas if you go the way of a co man, it can be one day a week. You can bitch that they made it on a Monday instead of a Tuesday, I can bitch that it got put out a week. But I’m not complaining that Joe didn’t show up to work so I can’t run the line. I’m not complaining that Sam can’t count the cases and shipped out the wrong pallet. I don’t have to worry about all that. It’s all the co man’s problem.

FamilyFarmed: Especially when it comes to organic, supply chain is still complicated… There still is surprising difficulty for buyers and sellers to connect. What are the biggest supply chain challenges?

Will: The biggest problem with supply chain, international and domestic, is the authenticity of the product… Dealing with reputable suppliers who have commitments to organic. Dealing directly with farmers who own the fields and only own organic fields… Going international is very tough. We get two or three fake certs a year… If the price seems too good, there’s normally a reason why.

The thing is when you’re using corn or wheat or stuff of that nature is that’s where people want to cheat. There’s so much of it that you have to be extra diligent on those products… Basically what it comes down to is your biggest risk is counterfeit. I feel sorry for brands that are trying to do the right thing but just don’t know how to do the right thing.

FamilyFarmed: Do businesses come to you? Do you find businesses and seek them out?

Will: Our entire business has been referral-based. It’s amazing. We do it for Fortune 500s, we do it for startups, we have private equity firms that use us for diligence… You just do good work and people advertise for you. As far as clients, I’ll mostly just talk to people and I’ll get a feel about whether I think they can make it. There’s a lot of brands where I’ll look at them and say, “Don’t bother paying me. Here’s where you need to go.”… A lot of people I talk out of getting into the industry. I must get three or four people a week who I tell, “You do not want to do this.” They ask why and I say, “It’s not a fit for what you have, there’s no passion behind it. You’re going to get clobbered.”…

What my partner really likes are manufacturing plants that are very challenged. He concentrates on a lot of self-producers, and getting co man and self-producers certified and stuff like that. Where he finds value is going into a factory that’s a complete wreck. He really feels like he makes a difference then, and he makes the food chain safer… He’s very committed to the safety of food products, especially child-related food products. 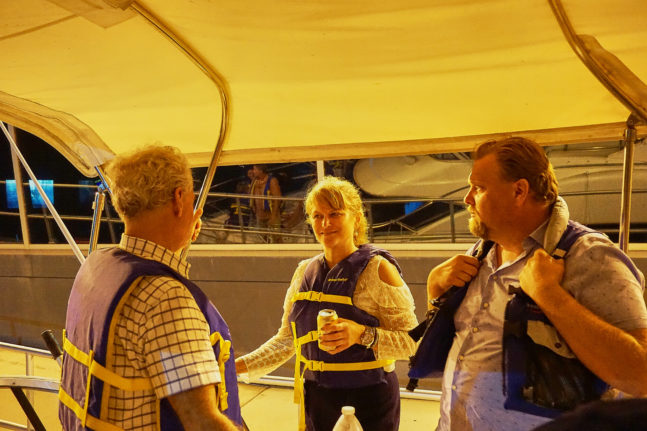 Will Madden of Whole Brain Consulting placed the winning bid for a food CEO yacht trip on the Chicago River and Lake Michigan at the Frontera 30th Anniversary Celebration co-produced by FamilyFarmed. Here Will (right), chats with FamilyFarmed CEO Jim Slama and Stacie Sopinka, vice president of innovation and product development for the US Foods distribution company, during the September voyage. Photo: Bob Benenson/Family Farmed

FamilyFarmed: What prompted you to make the big bid on the Frontera 30 boat trip?

Will: My wife asked me to? Honestly, it’s a good cause… One was donating to the cause and the other was taking a boat ride on Lake Michigan. There are definitely worse things to do… You get to benefit a good cause, you get to meet people in the industry that it’s not, I’m hustling you for business, you’re hustling me for business. It’s a nice casual environment. We got to meet some really cool people, who we probably wouldn’t have crossed paths with otherwise… 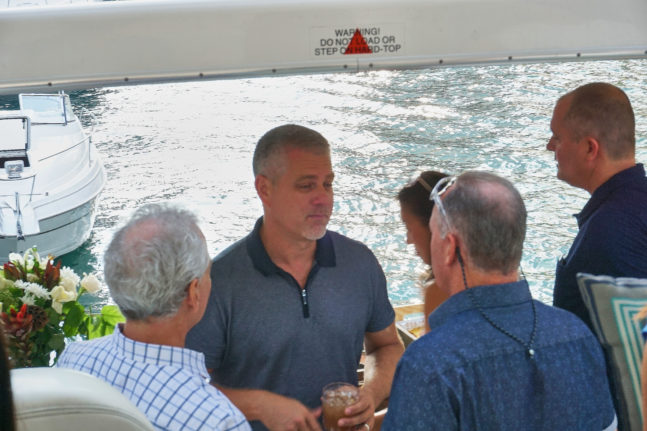 Tony Olson, center facing camera, is CEO of SPINS, the leading provider of retail consumer insights, analytics reporting, and consulting services for the Natural, Organic and Specialty Products industry. He owns the yacht on which the CEO cruise took place. Photo: Bob Benenson/FamilyFarmed 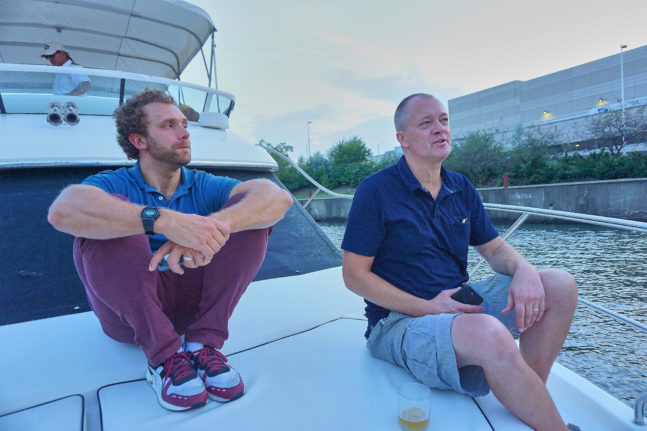 Invitees on the boat cruise included Lukas Walton (left), an investor and philanthropist in the Good Food space, and chef Paul Virant, a pioneer in Chicago’s farm to table movement, who owns the restaurants Vie and Vistro in Chicago’s Western suburbs. Photo: Bob Benenson/FamilyFarmed 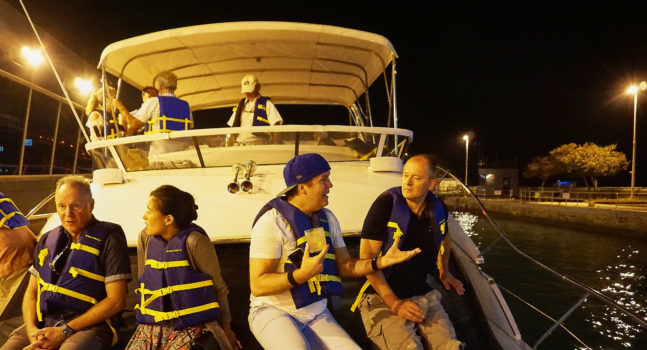 Chatting during the boat cruise (from left), Brandon Barnholt of KeHE, a leading distributor of natural & organic, specialty and fresh products; Kim Jung, a co-founder of Rumi Spice, which produces saffron products and provides Afghan farmers with an alternative to growing opium poppies; Bill Weiland, CEO of Presence Marketing, who since the early 1990s has been a pioneering marketer and investor in the Good Food sector (that is a Chicago Cubs hat he is wearing); and Chef Paul Virant. Photo: Bob Benenson/FamilyFarmed