This article — about Rowida Assalimy and her start-up company that is producing a traditional Middle Eastern beverage called Kishr — is part of a series of profiles of small businesses participating in the first class of Fellows in FamilyFarmed’s Good Food Business Accelerator program.

The Accelerator’s Demo Day @ 1871 on the evening of Monday, April 27 will provide an opportunity to hear presentations by Assalimy and the other creative entrepreneurs behind the nine Fellow companies and mingle with them at a reception following the program. To learn more and register for the event, click here, and please check out the links to other Good Food on Every Table stories about the Good Food Business Accelerator.

Differentiation is an important key to success in the expanding artisan food sector. This is certainly true in the beverage arena, where multiple brands of soft drinks, bottled teas and coffees, juice drinks, and even kombucha now compete for retail shelf space. 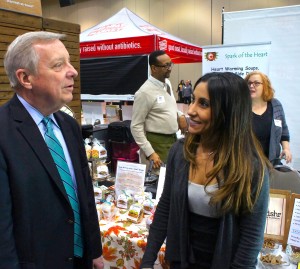 A number of food entrepreneurs have sought their special niche by reaching into their personal experience and background. This is something that Rowida Assalimy did when she launched Kishr, a traditional hot beverage of her parents’ native country of Yemen that she grew up drinking.

But Assalimy’s biggest challenge has been the opposite of an overly saturated marketplace. For many consumers (and potential customers), the concept of Kishr is so new that Assalimy’s first priority has been to explain what it is.

“When you are creating a new category, the main challenge is consumer education,” she said.

What is Kishr? Traditionally spelled qishr, it is a drink made from the coffee cherry, a part of the coffee plant that most Americans do not even know exists, and which, according to Assalimy, is a superfruit packed with antioxidants and other healthful attributes. “Most people are unaware that coffee is a fruit and that its outer casing is the most nutritious part of coffee,” she said.

This was an aspect of the product that Assalimy was counseled to emphasize more overtly as a member of the first class of nine entrepreneur Fellows in FamilyFarmed’s Good Food Business Accelerator program.

Kishr’s redesign says that it is a “superfruit brew,” and has the slogan, “Not Tea. It’s Better.”

This advice inspired a re-packaging campaign that identifies Kishr as a “Superfruit Brew.” The new label emphasizes that the drink is antioxidant, and also follows a couple of other values that are very important to many Good Food consumers: “Fair Trade” and “Non-GMO.”

“The Good Food Business Accelerator has helped us rethink every aspect of our business. In doing so, it has accelerated key milestones that are critical to our success,” Assalimy said, adding, “We are also very appreciative of the many connections that we made though the program, many of which have had a direct impact on our business.”

Assalimy will describe the product and her business plans in detail during the Accelerator program’s Demo Day @ 1871 on the evening of Monday, April 27. There will be presentations by all nine of the Fellow businesses and a networking reception that follows at the event, which takes place beginning at 6 p.m. at 1871, the center for entrepreneurial innovation located in Chicago’s famous Merchandise Mart. For more information or to register for the event, click here.

Like many Good Food entrepreneurs, Assalimy took an indirect route to this career. She worked as a management consultant for five years, and was enrolled in the University of Chicago’s MBA program when she decided to start the company.

“I did not have direct experience in the food business,” she said. “I’ve always had entrepreneurial aspirations, and I knew Kishr was a drink that needed to be shared with the world.”

Kishr is, in fact, brewed like tea and its closest analog, taste-wise, is a mildly spiced tea. But that presents another marketing challenge: Not getting lumped in as just another of the hundreds of varieties of black, green, and herbal teas on grocery shelves.

Hence, Kishr’s new packaging that identifies it as a “superfruit brew” and carries the slogan, “Not Tea. It’s Better.”

Assalimy sees two major factors contributing to her product’s ultimate success: the increasing consumer interest in the foods of different ethnic cultures, and the growing health consciousness that makes people perk up when they hear the word “superfood.”

“I definitely feel that the timing is right for Kishr,” Assalimy said. “Not only because consumers are becoming more sophisticated, but also because the coffee cherry is really gaining attention as nature’s ultimate superfruit.”

She added, “More and more research is coming out about the various health benefits of the coffee cherry such as those on cognitive health. This was even news to me!”