[Correction: The Hatchery food business incubator is negotiating the details of a City of Chicago grant, and the potential amount of that grant is $1 million. The original version of this article reported the amount was $2 million, based on statements made by Chicago Mayor Rahm Emanuel at a public event on March 2.]

The Hatchery, a food business incubator in Chicago, started up just last year with a small space but big plans. Those plans now may take a giant step toward fruition with the possibility of $1 million in economic development funding provided by the City of Chicago.

The funding would enable The Hatchery to break ground on an 80,000 square foot facility in East Garfield Park, a mostly African-American West Side neighborhood that in recent years has struggled with economic and population decline and rising violent crime rates.

The location is roughly two miles west of The Hatchery’s current location, in the building complex it shares with the Industrial Council of Nearwest Chicago (ICNC), a broad-based business incubator that partners with The Hatchery. 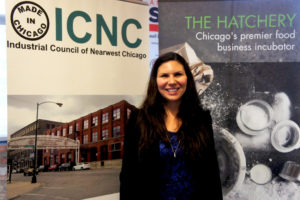 Natalie Shmulik runs The Hatchery, a food business incubator that will take on a major expansion, including a new facility, with $2 million in funding from the City of Chicago. Photo: Bob Benenson/FamilyFarmed

According to Natalie Shmulik, the food business consultant who runs The Hatchery, the East Garfield Park location was purposeful, to help bridge the food business gaps between the poverty-plagued communities of Chicago’s West Side and the more affluent areas downtown and in the nearby West Loop’s “Restaurant Row.”

“Why we’re building the facility there is to really try to provide opportunities for the underserved communities,” said Shmulik on March 2, at an ICNC board meeting celebrating that organization’s 50th anniversary at which Chicago Mayor Rahm Emanuel spoke. “There’s a food desert there and there’s a lot of challenges that they’re facing. But the community itself is fantastic and thriving. We want to just be able to create a better platform for them to continue to thrive.”

She continued, “What we’re going to be able to do now with these funds and some additional funds is really start building the infrastructure for our facility, move forward with our plan, and try to build the East Garfield Park community and help bring attention to the West Side in innovation, food and beverage production, really everything.”

Shmulik said that with the new funding, she expects The Hatchery will break ground on the site this year with a goal of completion by mid-2018. She said one of the attractions of the location, at Lake and Kedzie streets, is its next-door proximity to an El train station that serves the city’s Green Line.

“Access to transportation is so important. We’re going to have 57 private food-grade production spaces as well as a shared kitchen space and office space. We want to make sure than anyone who works there has accessibility,” Shmulik said.

Chicago is the biggest city in the Midwest and a national center for the nation’s food industry going back to the 19th century. It has some of America’s most storied restaurants; it is a hub for organizations such as FamilyFarmed that play a role in accelerating the already rapid growth of the Good Food movement; and it is recognized as fertile ground for the rise of urban agriculture.

Shmulik said The Hatchery is looking to build upon that base, and its own work since its launch, and also take it in distinctly 21st century directions. “What we’re envisioning is being the cog of innovation and bringing even more attention to Chicago, so it’s not just the land of incredible restaurants, agriculture and food service, but it’s also the place to find innovation for producers as well as food technologies. We see so many great possibilities,” Shmulik said.

This was also the point that Emanuel emphasized about The Hatchery during his talk at the ICNC meeting. Comparing The Hatchery to Chicago-based incubators such as 1871 in software development, Matter in health care, and mHub for technology-driven product development and manufacturing, Emanuel said, “Each of the reasons we’ve done these innovation spaces is to create an intellectual R&D backbone for companies that don’t have the facilities or don’t have the resources for R&D, but they want to try their idea out, or they want to take a product that they can’t really invest in and go to a space that they can use.”

The mayor also made the point underscored by Shmulik about bringing jobs and opportunity to the city’s communities that need it most. “It allows people of all educational achievements to get jobs. We want to be the city where no matter where you are in your life, opportunity is waiting for you,” Emanuel said. “The Hatchery is an opportunity to making sure that opportunity is for everybody in the city of Chicago.” 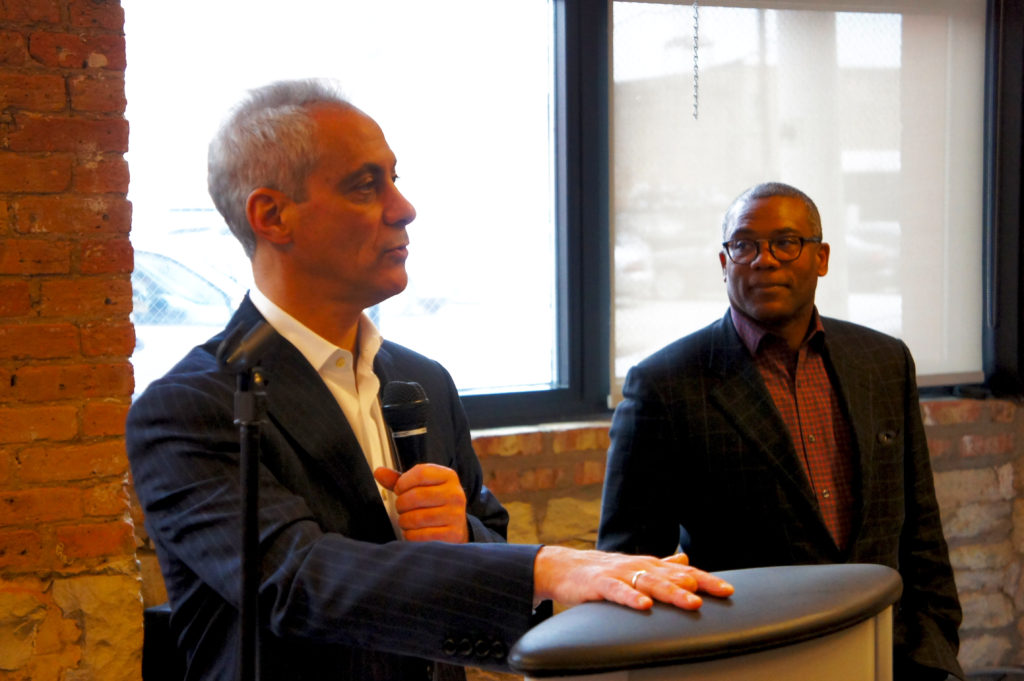 Chicago Mayor Rahm Emanuel, with Alderman Walter Burnett Jr., spoke at the 50th anniversary board meeting of the Industrial Council of Nearwest Chicago (ICNC), where The Hatchery food business is now located. Emanuel discussed the grant that the city is negotiating with The Hatchery to build a major new facility in the city’s challenged East Garfield Park neighborhood. Photo: Bob Benenson/FamilyFarmed

You can learn more about this major new project by attending FamilyFarmed’s Good Food Financing & Innovation Conference‘s Financing Fair on Thursday, March 16, the Good Food Trade Show on Friday, March 17, and the Good Food Festival on Saturday, March 18. The Hatchery is a joint venture with nonprofit organization Accion will be sharing a space in the exhibit hall for all of these events with , another of its business partners, which provides funding for entrepreneurs who are creating economic growth and jobs in Illinois and Northwest Indiana.

Shmulik also will participate on a panel during the Friday, March 17 programming titled The New Food Entrepreneur.

In addition, Shmulik reports that 11 businesses that have worked with The Hatchery will be participating in FamilyFarmed’s Good Food Festival & Conference, which begins Thursday, March 16 with the Good Food Financing & Innovation Conference.

They include Kitchfix, a 2016 graduate of FamilyFarmed’s Good Food Business Accelerator (read more about Kitchfix and its ingredient transparency practices here), and Tea Squares, a member of the current Accelerator cohort, which is making healthy energy snacks in the troubled Englewood neighborhood on the South Side (more about Tea Squares here).

The other Hatchery clients participating in FamilyFarmed’s event are:

Read It & Eat, a cookbook store with a teaching kitchen in Chicago’s Lincoln Park community, is one of the clients of The Hatchery incubator that will take part in FamilyFarmed’s Good Food Festival. As it did last year, the store will manage book sales for the authors who are participating in the Festival. Photo: Bob Benenson/FamilyFarmed