Many consumers identify Good Food as local because they buy directly from producers at farmers markets and through Community Supported Agriculture (CSA) subscriptions. And retail demand for local food is fueling the development of indoor-growing technologies, which enable year-round production of items such as tomatoes, greens and herbs in places (such as our hometown of Chicago) where the outdoor growing season runs about six months.

Yet… that same rising tide of consumer demand for  Good Food is prompting more and more retailers, wholesalers and chefs to think globally while they act locally. And this is forcing a reconsideration of whether Good Food = local food all the time. 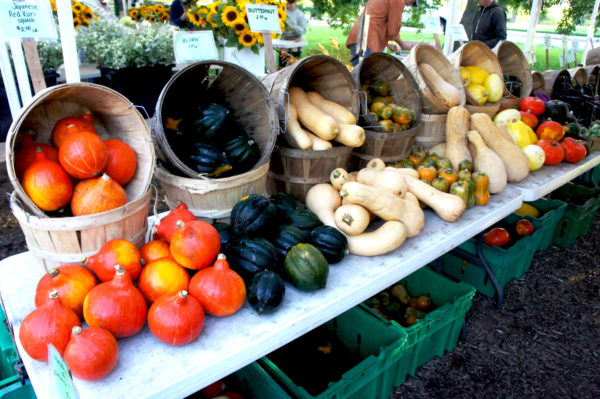 For many advocates, Good Food has for years been a virtual synonym for Local Food. The number of farmers markets in the United States, such as Chicago’s Green City Market (Green Acres Farm stand) pictured here, quadrupled over the past 20 years. Photo: Bob Benenson/FamilyFarmed

Even FamilyFarmed in recent years has made a subtle adjustment, saying that Good Food is produced as locally as possible (instead of simply “local”) using sustainable, humane and fair practices.

This key issue for the movement will get a high-profile airing with FamilyFarmed’s “Does Good Food Need to Be Local?” panel discussion, which will keynote the Good Food Trade Show and Policy Conference on Friday, March 17 (for more information about the event, or to buy tickets, please click here).

The all-star group of participants, who cover all the bases of this important matter, are:

Helping Small Farms in the Midwest — and Mexico

Bayless, for one, will be able to share powerful perspectives about both sourcing locally and reaching beyond local — in both cases to extend his pioneering role in developing markets for small farmers.

Since he opened his landmark Frontera Grill 30 years ago, and popularized regional Mexican cuisine in the United States, Bayless has purchased ingredients from local farmers to help them grow their businesses. He was a major supporter of the first big wave of farmers markets that emerged in Chicago during the 1990s.

And he went much farther in 2003 when he established the nonprofit Frontera Farmer Foundation, which has given a total of nearly $2 million in grants to dozens of Midwestern farmers to help them succeed. 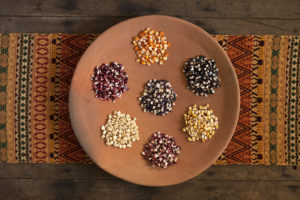 Native, or landrace, corn from the Mexican state of Oaxaca grows in a range of beautiful colors. Chicago’s Rick Bayless is among the leading chefs across the country who are importing this corn, for authenicity in their cuisine and to provide a market for Oaxacan peasant farmers. Photo provided by Masienda.

But Bayless, who lived in Mexico for several years deeply researching its regional cooking styles, also is doing his part to help peasant farmers in the Mexican state of Oaxaca by buying heirloom corn — from Masienda, a company that imports from that region — for the tortillas he serves at his expanding group of restaurants.

“Our buying their corn is really creating a viable market in a different place. It means the non-commodity stuff,” Bayless said in a June 2016 interview for an article on Good Food on Every Table. “We’re getting them out of food as commodity and into food as a specialty ingredient that we’re willing to pay real money for. Then the neighbors see that, and before you know, we’re actually changing the agricultural economy to a certain degree.”

In addition to the social mission this entails, Bayless said this corn provides a more authentic flavor than even the sustainably produced corn he regularly buys from Illinois farmers much closer to home. “When we saw the first batch of masa come in the back door and the aroma of it, all of our staff that was born and raised in Mexico just automatically stopped and they said, ‘What is that smell? I haven’t smelled that in years and years,” said Bayless.

Bayless’ food sourcing roots remain planted in the Chicago region, though, and he is an outspoken advocate of the greenhouse, hoop house and indoor vertical farming operations that are not only expanding the volume of local food, but extending the local growing season to virtually year-round for a still small but growing number of products.

One of these is MightyVine, a company that uses greenhouse practices developed in The Netherlands to grow tomatoes in Rochelle, Illinois (80 miles west of Chicago) that are ripe and near field-grown quality, unlike the hard and unripe tomatoes identified with traditional greenhouse growing. 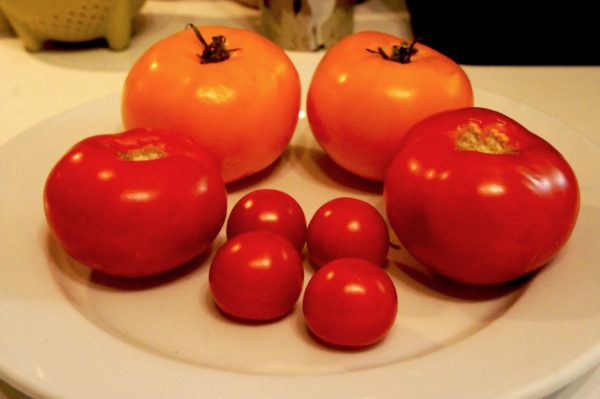 MightyVine tomatoes, such as these grown in February 2017 in the company’s greenhouses near Chicago, provides year-round availability of this product at a quality many chefs and consumers find comparable to that of in-season field-grown tomatoes. Photo: Bob Benenson/FamilyFarmed

Murphy — who heads the company along with Local Foods, an appropriately named distributor and grocer — not only is on the March 17 panel with Bayless, but is a co-chair of the Frontera 30th Anniversary Celebration on April 30 at the Art Institute of Chicago, a fundraiser that will benefit the Frontera Farmer Foundation and FamilyFarmed.

Bayless is one of a number of restaurateurs, grocers and consumers who consider MightyVine tomatoes one of the biggest developments in recent years on the Chicago culinary scene.

“From a chef’s perspective, what I like about them, they taste like real tomatoes,” said Bayless during a Feb. 7 cooking demo on Chicago Tonight, a program on Chicago public TV station WTTW. “We don’t use the hothouse ones in the summer, we’ll get them from our local farmers. But there was one moment where we were making the transition. We did a blind tasting, and I couldn’t tell these from the ones that are raised in the field, vine-ripened tomatoes. They’re just that good. They smell like the middle of summer.”

MightyVine is growing 7 million pounds of hydroponic tomatoes in two 7.5-acre greenhouses, according to an article on indoor growing published Feb. 24 by Crain’s Chicago Business.

This is part of a trend that could take off in a big way, according to Sanjeev Krishnan, co-managing director of Seed 2 Growth (S2G) Ventures, who told Crain’s, “It reminds me a bit of solar 1.0, where capital intensity is unknown or varied, and the industry is immature and unproven… We believe in the trend of growing closer to your demand center. It makes sense for logistics costs, (spoilage) and a product quality perspective.”

S2G, a venture capital firm that invests in sustainable agriculture and food companies, will receive FamilyFarmed’s 2017 Good Food Business of the Year Award at the Good Food Financing & Innovation Conference, which kicks off FamilyFarmed’s three-day Good Food Festival and Conference on Thursday, March 16.

Also on that day’s program is Viraj Puri, CEO of New York City-based Gotham Greens, which grows salad greens and herbs in a spacious greenhouse atop a sustainably produced soap factory in the Pullman neighborhood on Chicago’s far South Side. Puri, who will appear on a panel titled “Good Food Close to Home,” told Crain’s, “Right now the demand in the marketplace exceeds our supply.”

It becoming increasingly apparent that the growing consumer demand for Good Food will be met with a combination of traditional sourcing from local farmers, new technology-aided indoor techniques, and a reach across the country and across our borders for products that have a particular flavor profile, are available locally only in-season… or are simply never available locally.

The truth is that people in the Chicago area like coffee and pineapples and bananas as much as the next guy, and if that stuff starts growing in the Great Lakes region, even the most fervent climate change denier would have to throw in the towel.