And as if Sarah were not enough reason to make your way to the UIC Forum on Saturday, March 24, wait until you see the rest of the lineup for our popular Chefs at Play stage. Mind blown. You’d pay big money to see all of these top chefs together anywhere else.

Did we mention general admission to the Good Food Festival is free (though pre-registration is requested)?

There is a Master Class about the culinary uses of vinegar, which requires a paid ticket, led by Michael Harlan Turkell, author of the delightful and informative book Acid Trip: Travels In the World of Vinegar. All other events at FamilyFarmed’s family-friendly public celebration of the Good Food movement are free of charge: the Good Food Marketplace, with more than 150 farm and food exhibitors and vendors; the Chefs at Play stage; the Good Food Is Good Medicine programming; inspiring panels on a range of Good Food issues; the DIY-oriented Organic Valley Good Food Commons; and much more.

Over the past year, Sarah Grueneberg has been collecting award hardware like an Olympic champion for her pasta-centric Monteverde in the West Loop — her first restaurant venture after several years as the top chef at Chicago’s famed Spiaggia. Last May, she received the James Beard Foundation Award for Best Chef Great Lakes, winning the first time she was nominated for the prestigious prize. In January, she was back on a stage when Monteverde was named Best Restaurant of the Year at the Jean Banchet Awards, known as Chicago’s culinary “Oscars.” 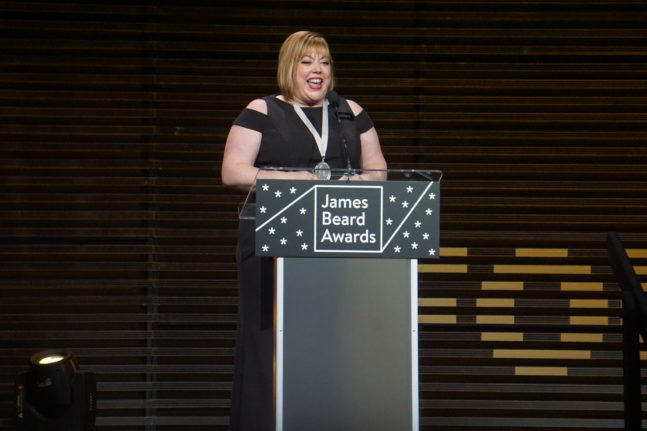 A jubliant Sarah Grueneberg of Monteverde restaurant made an acceptance speech after receiving the James Beard Foundation Best Chef Great Lakes Award in Chicago on May 1, 2017. Photo: Bob Benenson/FamilyFarmed

Sarah is also one of the most charming personalities on the Chicago restaurant scene, and we’re sure she’ll let you know all about her pilot TV series, Dishalicious; three segments, featuring Sarah cooking with other leading chefs, are being produced by the folks from the popular “Check, Please!” series and are scheduled to air starting in April. It is a return to the home screen for Sarah, who made her first national splash in 2012 when she was a finalist on Bravo’s Top Chef competition. [Look for a full profile of Sarah here on Good Food On Every Table coming soon.]

The other luminaries taking to the chef’s stage at the Good Food Festival are: 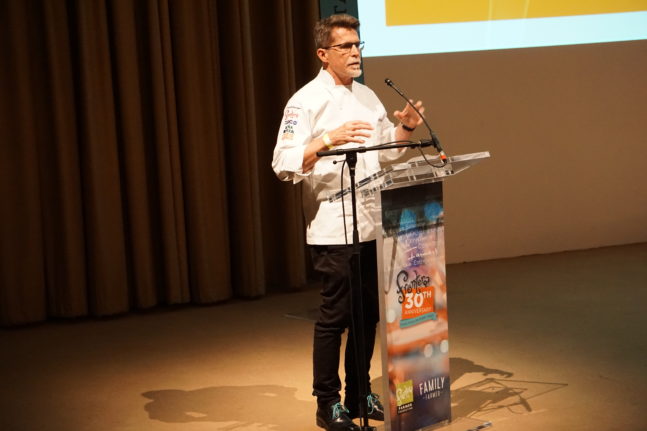 Chef Rick Bayless, a pioneer in regional Mexican cuisine and local ingredient sourcing in the Chicago region, delivered a keynote address at the Good Food Forum, which kicked off the Frontera 30th Anniversary Celebration at the Art Institute of Chicago on April 30, 2017. The event was a fundraiser co-produced by FamilyFarmed and Rick’s Frontera Farmer Foundation, which provides grants to family farmers in the Midwest. Photo: Bob Benenson/FamilyFarmed

Purple Asparagus is a nonprofit that brings informative and engaging lessons on seasonal produce to young children in Chicago Public Schools. The organization will continue its longstanding tradition of producing family-friendly content at FamilyFarmed’s Good Food Festival. Photo: Bob Benenson/FamilyFarmed

FamilyFarmed strongly believes we must instill Good Food values and habits in our youngest eaters, and we are allied with food education and school gardening programs — Pilot Light, Gardeneers and Big Green (formerly The Kitchen Community) — that are doing remarkable work with children, most of them living and learning in underserved communities.

Representatives of each of these programs will participate in a panel discussion on Saturday afternoon of the Festival, followed by a joint demo about grain, flour and bread presented by Pilot Light and members of the Artisan Grain Collaborative.

And don’t miss that Master Class focused on one of the hottest topics in the Good Food and culinary worlds — fermented foods, in this case spotlighting vinegars. Michael Harlan Turkell, who has perfected the art of making vinegars at home, traveled the United States, Japan, Italy, France and Austria in search of the world’s best vinegars. He will share from among the recipes that show the myriad ways in which vinegars can be incorporated into your own cooking.

Michael will share the Master Class stage with Chef Abe Conlon and co-owner Adrienne Lo of Chicago’s Fat Rice restaurant, who will present their own recipes includes vinegars that reflect the Asian cuisines in which they specialize.

Visit the EXPO ticket page to order your ticket to the Master Class. 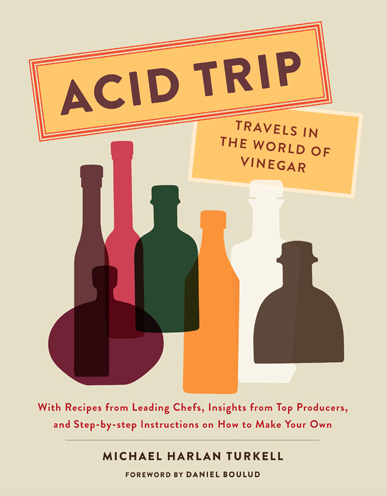 The Good Food Festival is the second half of the two-day Good Food EXPO. Day 1 on Friday, March 23 features The Good Food Trade Show: Production, Policy & Industry Exchange. This affordable ticketed event is a must for Good Food producers, buyers, sellers, investors and others with an interest in the fast-growing market for local and sustainably produced food. Read more about it in this article published on Good Food On Every Table — where you can also learn about how FamilyFarmed is bringing its nationally renowned Farmer Training workshops to the UIC Forum on Thursday, March 22 and Friday, March 23.

Visit the EXPO site to learn more about opportunities to exhibit, sponsor or volunteer at the Midwest’s premier Good Food event.